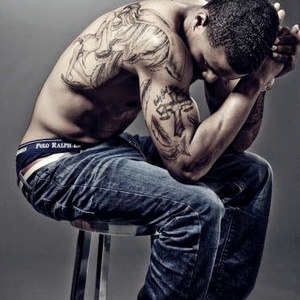 Tremaine Aldon Neverson (born November 28, 1984 in Petersburg, Virginia), better known by his stage name Trey Songz, is a Grammy award nominated American singer, producer and actor. After releasing many mixtapes under the name Prince of Virginia he signed to Atlantic Records in 2005 and released his debut album I Gotta Make It. His second album, Trey Day, was released in 2007 and earned him a Grammy nomination. His latest album, Ready, was released in September 2009 and debuted at #3 on the Billboard 200, and his upcoming album Passion, Pain & Pleasure is expected to be released September 14.

He also performs under the alias Trigga when he raps and is known as Songz 00711 while performing in the group Ocean's 7.

Songz was born Tremaine Aldon Neverson on November 28, 1984, in Petersburg, Virginia. Raised a military brat, he recognized his vocal abilities at the age of 14. Reluctant to sing, he began performing with encouragement by friends and family. Record producer Troy Taylor discovered Songz during a talent show, which led him to a record contract with Atlantic Records. After graduating from high school, Songz moved to New Jersey to begin his music career.


2004?2006: I Gotta Make It
While recording his debut album, Songz released mixtapes under the alias Prince of Virginia. He made an ?answer track? to R. Kelly's ?Trapped in the Closet?, entitled ?Open the Closet?.His debut album, I Gotta Make It was released in July 2005 by Atlantic Records. It debuted at number 20 on the Billboard 200, domestically selling over 10,000 copies in its first week of sales. Songz's debut album yielded the singles Gotta Make It, debuted on the Billboard Hot 100 at number 87, and on the Hot R&B/Hip-Hop Songs charts at numbber 21, becoming his first Top 40 R&B hit. Another single, Gotta Go, peaked at number 67 on the Hot 100 and on the Hot R&B/Hip-Hop Songs, at number 99.


2007?2008: Trey Day
Songz released his second studio album, Trey Day, in October 2007. The album again had only featured guest appearances by Bun B, who appeared on the opening track, and Jim Jones. Production on Songz's second album had included, Bryan-Michael Cox, R. Kelly, James Harris, Terry Lewis, Andrew Harr, Bernard Freeman, Floyd Hills, alongside Tamir ?Nokio? Ruffin, Justin Haro, and M.S. Eriksen. The album debuted at number 11 on the Billboard 200, selling more units than his previous album, I Gotta Make It. The lead single, ?Wonder Woman?, peaked at number 54 on the Hot R&B/Hip-Hop Songs chart, but failed to chart on the Billboard Hot 100.


2009?present: Ready
In 2009, ?Can't Help but Wait? earned Songz a nomination for Best Male R&B Vocal Performance at the 2009 Grammy Awards ceremony. He announced the upcoming release of his third album, Ready, scheduled to be released in September 2009. Ready is preceded by the first single, ?I Need a Girl?. Furthermore, a companion video to ?Brand New?, was released in March 2009. Possible collaborators on Ready include Fabolous, Ne-Yo, Nelly, J. Holiday, Drake, Chris Brown, The Game, amongst others. Production is set to come from the likes of Stargate, Jermaine Dupri and Jim Jonsin.

Prior to the release of Ready, Songz released a mixtape titled Anticipation in June 2009 through his blog. This mixtape is the second mixtape released by Trey Songz in 2009, with the first being titled Genesis. Genesis was a collection of Trey Songz first recordings when he was fifteen years old and was released to show his fans the dedication that he had to making a record when he was young.

To Whom It May Concern