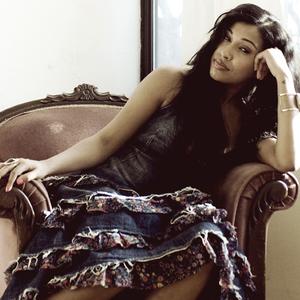 Melanie Fiona Hallim (born July 4, 1983) is a Grammy winning Canadian R&B singer-songwriter from Toronto, Ontario. She was born to Guyanese immigrant parents (mixed with black, Indian, and Portuguese ethnicities) and grew up in the inner city of Toronto. Living in a music filled household, Fiona says she always knew music was her passion. Her father was a guitarist in a band and would allow her to sit on the stage when she was younger as he practiced, and remembers her mother playing music at home; everything from The Ronettes to Whitney Houston.

Fiona was featured on Reggae Gold 2008 with the Supa Dups-produced "Somebody Come Get Me". Her debut album The Bridge was released in the summer of 2009. She worked on the album with Future Cut, Vada Nobles, Stereotypes, J. Phoenix, Peter Wade and Salaam Remi. The debut single "Give It to Me Right" was released to radio stations on February 28, 2009, and peaked at #20 on Billboard's Canadian Hot 100 and #41 on the UK Singles Chart. The second single, "It Kills Me", became her breakout song on the Billboard Hot 100 where it cracked the Top 50, along with hitting #1 on the Hot R&B/Hip-Hop Songs chart. The song earned Fiona a Grammy Award nomination for Best Female R&B Vocal Performance.

Her second album, The MF Life, was released through the SRC Records and Universal Republic on March 20, 2012 after several delays. The Break Down The Walls Songfacts reports Fiona told Billboard magazine that her goal with The MF Life was to give an "honest" depiction of her life and how things have changed from her debut set, The Bridge.

In 2002, Fiona was briefly involved with girl group X-Quisite. Early in her career, she would perform at nightclubs in Toronto. In 2005, Fiona traveled to Los Angeles, California, in search of a recording contract. According to Fiona, record labels "loved" the way she looked and sung, but "knew that the minute I worked with them or would have signed with them, they would have tried to change me into someone else completely different. That was something that I didn't want to do." She went on to co-write songs for recording artists Rihanna and Kardinal Offishall. Fiona also recorded the reggae song "Somebody Come Get Me" under the stage name Syren Hall, which was included in the Reggae Gold 2008 compilation album. Entrepreneur Steve Rifkind discovered and signed Fiona to SRC Records and Universal Motown in 2007. She went on to tour with Kanye West in his Glow in the Dark Tour.

Gone And Never Coming Back (CDS)