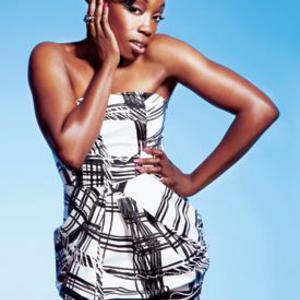 Estelle Fanta Swaray (born 18 January 1980 in London, United Kingdom) commonly known as Estelle, and formerly as Est'elle, is an English R&B singer-songwriter, rapper and record producer. In 2009, she won a Grammy Award for American Boy featuring Kanye West in the category for Best Rap/Sung Collaboration as well receiving the MOBO for 'Best Newcomer' and received three consecutive 'Best Female Artist' trophies from the UK Hip-Hop Awards.

In 2004 she broke into the charts with 1980 and Free and won a MOBO Award for Best Newcomer. Both of the videos were directed by Andy Hylton and received much airplay on music channels. Free was written by Estelle and produced by Jimmy Hogarth. Her first album,The 18th Day charted at number 35 in the UK Albums Chart. Estelle teamed up with short lived pop band 3SL for their single Touch Me Tease Me.

In 2008, Estelle rose to fame with her collaboration with rapper Kanye West, titled American Boy. This song reached the top 10 in many countries worldwide, including the United States and Canada, as well as achieving number-one status on the UK Singles Chart and in Belgium and Israel. The song won many awards worldwide, including Best Rap/Sung Collaboration. It was also nominated for Song of the Year at the 51st Grammy Awards. American Boy was Number 7 on Rolling Stone's list of the 100 Best Songs of 2008. Shine was released following the single on John Legend's HomeSchool label, reaching the albums chart in most countries worldwide, including number 6 in the UK. Shine sold enough copies to be certified gold by the British Phonographic Industry, and was shortlisted for the prestigious 2008 Mercury Music Prize. Estelle has also released a new single with American rapper Busta Rhymes called World Go Round, from his album Back on My B.S., which was released on 19 May 2009.