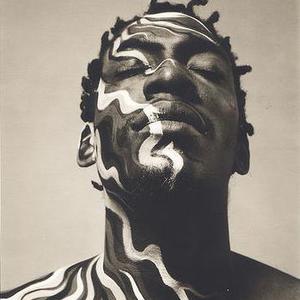 Roots Manuva, born Rodney Smith is a British hip-hop artist, who mixes hip hop with reggae and dub as well as electronica, and even some gospel. He grew up around Stockwell in South London. His parents were from a small village in Jamaica called Banana Hole where his father was a preacher and tailor. Spending much of his early years in poverty, this and his strict Pentecostal upbringing clearly had an influence on his music as can be seen in many of his tracks such as "Sinny Sin Sins" and "Colossal Insight".

Smith made his recorded debut in 1994 as part of IQ Procedure through Suburban Base's short-lived hip hop imprint Bluntly Speaking Vinyl. He debuted as Roots Manuva the same year on Blak Twang's "Queen's Head? single, before releasing his own single, ?Next Type Of Motion? the following year. 1996 saw the release of his collaborations with Skitz (?Where My Mind Is At?/?Blessed Be the Manner?). The release of ?Feva? followed in 1997; this was also the year that saw the first releases from Big Dada, a collaboration between Coldcut's Ninja Tune label and hip hop journalist Will Ashon.

Releasing for Coldcut's renowned experimental/hip-hop label Ninja Tune in 1998, some of his music may be seen as a predecessor of grime. The following year he released his fearsome debut album, ?Brand New Second Hand?. Manuva was rewarded for his breakthrough with a MOBO as Best Hip Hop Act that year. He has also relesed 2001's ?Run Come Save Me?, followed the next year by ?Dub Come Save Me? in, which features dub remixes of five songs from the previous album alongside new work. This was followed up with the release of ?Awfully Deep? in 2005 and ?Alternately Deep? in 2006.

The lyrics of his songs are usually known to take a distinctly British edge, with many critics highlighting his references of eating cheese on toast and drinking bitter as examples of this. His warm and easily recognizable voice can be heard on many songs he performed with other artists such as Chali 2na (of Jurassic 5 & Ozomatli), DJ Shadow, U.N.K.L.E., Nightmares on Wax, The Cinematic Orchestra, Beth Orton and Leftfield. He also made an appearance on the Gorillaz latest album, Demon Days, lending his distinctive vocals to the track, "All Alone".

Nice Up The Function (With Mr. Scruff) (EP)