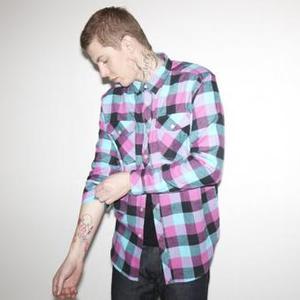 Professor Green is an english rapper from Hackney, East London, currently signed to Virgin Records, after Mike Skinner's The Beats label closed, and ended a run of his own radio shows on BBC Radio 1. He was signed to The Beats, a record label run by Mike Skinner and Ted Mayhem from 2006 until 12 February 2008, when the label terminated. He rose to success upon winning the inaugural JumpOff MySpace ?50,000 battle rap tournament in July 2008. Following this in 2009, Manderson worked with Lily Allen on her 2009 concert tour.

He was signed to The Beats, a record label run by Mike Skinner and Ted Mayhem from 2006 until 12 February 2008, when the label terminated. He rose to success upon winning the inaugural JumpOff MySpace ?50,000 battle rap tournament in July 2008. Following this in 2009, Manderson worked with Lily Allen on her 2009 concert tour.

Growing up on the Northwold estate in Upper Clapton, Green's familial situation saw him being raised by his grandmother while he traded up school attendance for just hanging on the estate, like kids do. The Read All About It Songfacts reports that he had a turbulent relationship with his father, who was rarely around during Manderson's childhood and committed suicide in 2008. In his hit single, Read All About It, Green responds to accusations made by his stepmother that his debut album, Alive Till I'm Dead, was "cashing-in" on his death.

While the usual nefarious stories of low budget living played a part in his life, Green's formative years were also characterised by fun: skating was big on the estate, etc. He also had an early inkling that the art of verbal sparring would somehow play a part in his life, confessing how, he always wanted to be a barrister or a lawyer. "I like debates and I've always been argumentative, I think that's helped me in battles a lot."

However, while becoming obsessed with hip-hop at the age of nine "Biggie [The Notorious B.I.G.] is my greatest hip-hop influence", Green only switched up from passive fan to active participant at a relatively late stage. After turning 18 years old, he coined his first rhyme completely off-the-cuff when put on the spot at an impromptu freestyle jam session round a friends house. Passing the test with aplomb and impressing his music making peers, the underground rap battle scene suddenly opened up before him.

After seeing a poster advertising a rap battle at the Lyric Pad night in London, Green turned up and won. From that he graduated to competing at the prestigious Jump Off events, performing at venues like The Scala and Sound in Leicester Square, and becoming the first ever contestant to win six straight weekly finals in a row. While his seventh showdown ended in defeat, he returned undeterred, put together a second run of consecutive victories and became the first string seven wins together. Throw in a further series of seven straight wins and a dalliance with pay battles, and Green became a man to fear on the battle circuit.

Cue a change of scene and a flight to the exotic climes of the Bahamas to spar for $50,000.

Entering the Power Summit battle against America's finest freestyle icons (think 8 Mile but with no holds barred), the crowd may have first viewed Green as this white English kid who's not going to do anything, but his gift of gab and ability to coin scathing punchlines saw him through to the final where he faced Jin, a member of DMXs much amped Ruff Ryders camp. The judges decided in Jin's favour, although with the Ruff Ryder man having been given a bye to the final and Green having already been through seven prior knockout bouts (including taking out representatives from Eminem's Shady Records camp), by his own admission it was "more a case of me losing it as opposed to Jin winning it."

Still, with a crowd featuring US big rap guns like Busta Rhymes and Saigon, Green made a name for himself and in September went off to Hawaii to compete in the battle again.

A performance at the B-Boy Championships last summer ultimately paid greater dividends and opened him up to a new audience in Mike Skinner of The Streets fame.

"Mike approached me after the B-Boy Championships and wanted to bring me on tour with The Streets" he recalls. I ended up doing an opening battle on the tour and we formed a great relationship from that. At first it wasn't about me looking for a record deal though it was more a case of us deciding to lay down some tracks and seeing where it went.

At the end of April 2006 he signed on the dotted line to release his debut album on Skinner's The Beats label. And while UK hip-hop's profile is certainly in the ascendancy thanks to acts like Skinnyman, Sway and Kano, Green has his eyes on breaking out beyond the usual urban tag affixed to British rappers.

Name-checking Portishead, Radiohead, Tracy Chapman and Suzanne Vega as song-writing influences, Green is well aware of the importance of adapting his lyrics from the immediacy of the live battle circuit to cater to the depth of the album format.

"The thing with hip-hop is if you take a lot of rap songs outside of rap then they aren't great songs, whereas with something like country if you take them outside of the genre then the song-writing skills are still incredible, he rationalises. And I'd like to take those skills into rap."

So while never completely leaving behind the entertaining punchlines that have characterised his battle persona, the album will take in everything from songs about his estranged parents to wish lists of things to do before he passes away and the plight of the average stereotypical man in the eyes of the average stereotypical female (see Stereotypical Man, complete with the catchphrase "'Til my breathings done I'll be reading page three of The Sun").

As Green concludes of his new goals "I wouldn't be happy to sell just 30,000 copies of my album. I don't think that there's anything wrong with aiming above that, giving people an album they can relate to, and wanting to be successful."

Growing Up In Public

Read All About It (CDS)

I Need You Tonight (MCD)

Just Be Good To Green (MCD)