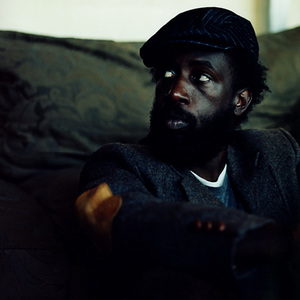 Born in Newburgh, New York, United States, 1972, Saul Williams is considered a powerful voice of the hip-hop generation as a poet, actor, rapper, singer and musician. Best known for his blend of spoken word poetry and hip-hop, and for his leading role in the independent film Slam, he received notable recognition while supporting Nine Inch Nails for parts of their 2005-2006 tour. Saul's third album, The Inevitable Rise and Liberation of Niggy Tardust, was produced by Trent Reznor, and released via the internet on November 1, 2007.

In the days leading up to its release, several tracks featuring a combination of industrial and hip-hop production were "leaked" to the internet.

Williams has published four books of poetry: "The Seventh Octave", "S/he", ",said the shotgun to the head." and "The Dead Emcee Scrolls"; and released four albums: Amethyst Rock Star, the self titled Saul Williams, The Inevitable Rise and Liberation of Niggy Tardust, and most recently, Volcanic Sunlight.

The Inevitable Rise and Liberation of NiggyTardust!

Said The Shotgun To The Head

Not In My Name