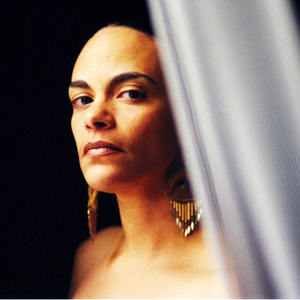 Ursula Rucker (b. Philadelphia, PA, USA), grew-up in Philly, where she graduated Temple University's journalism program. She is of African-American & Italian descent. She had been writing poetry since adolescence - keeping writings to herself - until she read poetry, in 1994, at Zanzibar Blue, Philadelphia (credited as her d?but). That very same year, Rucker was invited to collaborate with numerous recording artists, and producers including King Britt, 4hero, Jamaaladeen Tacuma, Josh Wink and most notably The Roots.

That very same year, Rucker was invited to collaborate with numerous recording artists, and producers including King Britt, 4hero, Jamaaladeen Tacuma, Josh Wink and most notably The Roots.

Rucker's garnered a reputation for unique poetry techniques and stage presence which were described as "strong, vulnerable, wounded and raging". King Britt gave Rucker recognition and invited her to create her first spoken word recording, the 1994 club hit, Supernatural. Dance music fans and DJ's quickly appreciated Rucker's vocals and rhythm, which was described as "mystical". According to Britt, while the original and remixes of Supernatural were continually used in clubs widespread throughout the United States. Internationally, the most popular mix of the song remains the a capella.

Rucker's emotion in her work and words, has led some critics to compare her to celebrated writers like Sonia Sanchez and Nikki Giovanni, describing them as "powerful". Coincidentally, when Ntozake Shange was unable to supply The Roots with a spoken word contribution for their debut album Do You Want More?!!?!!, they called on Rucker to do it in her stead. The Unlocking led to subsequent invitations to close The Roots follow-up albums Iladelph Halflife and the certified gold record Things Fall Apart.

In numerous reviews, many critics proclaim the value of Rucker's work with The Roots, 4 Hero and other groups. Rucker has had reviews in, URB, Vibe, XXL, Panache, The Philadelphia Inquirer, and Straight No Chaser. Rucker has also performed her work at an array of venues, universities and festivals. Among these venues include the Montreal Jazz Festival, the 1999 Winter Music Conference, a performance at Drexel University and the 2005 Amnesty International Australia Freedom Festival which aimed to raise aware of Amnesty's global "Stop Violence against Women" campaign.

Rucker has toured with Jamaaladeen Tacuma, Sylk130, and 4 Hero in the United States and internationally in Europe. Rucker also has provided a single Soon for Unbound, which was off a benefit album for Mumia Abu Jamal who is most famous for his 1982 conviction and death sentence for the December 9 murder of officer Daniel Faulkner. Andy Puleston at bbc.co.uk writes in his review of her album Supa Sista: Ursula's vocals...is a silken delivery, that like Michael Franti, demonstrates that a quiet word in the ear can speak volumes above the microphone rant. Paul Sullivan also of bbc.co.uk says in his review of her album Silver or Lead: Ursula's velvety voice...manages to both mollify and add a sinister dimension to the harshness of her subject matter.

Spaces In Between (CDS)