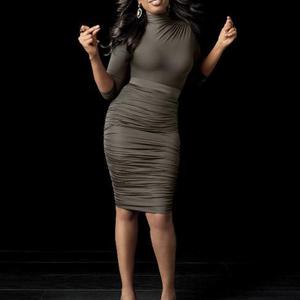 Jennifer Kate Hudson (born September 12, 1981 in Chicago, Illinois) is an American singer and actress. She is both an Oscar and Grammy Award winner. She was one of the finalists on the third season of the reality/talent-search television series American Idol. Prior to American Idol, Hudson had worked as a singer and actor aboard cruise ships, but never had any formal musical training. Hudson auditioned for the third season of American Idol in Atlanta, Georgia. She was a member of the first group of semifinalists in the Semifinals.

Prior to American Idol, Hudson had worked as a singer and actor aboard cruise ships, but never had any formal musical training.

Hudson auditioned for the third season of American Idol in Atlanta, Georgia. She was a member of the first group of semifinalists in the Semifinals. She was not voted through to the final round, although she was brought back on the wild card round and put through as a Top 12 finalist by contest judge Randy Jackson.
Jennifer Hudson struggled to gain popularity in the early stages of the live shows, receiving the second-lowest number of votes in two of the first three shows. However, after a change in song choices, she soon became a favorite to win, receiving the highest number of votes in the Top 9 after her performance of Elton John's "Circle of Life" on April 6, 2004.
On April 21, 2004, Hudson became the sixth of the 12 finalists to be voted off the show, finishing the competition in seventh place. Her elimination sparked a lot of controversy, as she was considered one of the front-runners for the title, and was joined in the bottom three by the other two front-runners LaToya London and eventual winner Fantasia Barrino.

Hudson recorded "Neither One of Us (Wants to Be the First to Say Goodbye)", originally by Gladys Knight & the Pips, for American Idol Season 3: Greatest Soul Classics?the official American Idol album for the third season.

In November 2005, Hudson was cast in the prized role of Effie White, the role originally created in a legendary Broadway performance by Jennifer Holliday, for the film adaptation of the musical Dreamgirls, which also starred Jamie Foxx, Beyonc? Knowles, and Eddie Murphy. This role marked Hudson's debut screen performance. Hudson won the role over hundreds of professional singers and actresses, including American Idol winner Fantasia Barrino.
In many reviews she was described as the real break out star of the film, overshadowing her co-stars the much more popular and successful Beyonc? and Jamie Foxx. Her version of "And I Am Telling You, I'm Not Going" is thought to be the highlight of the movie and it's soundtrack. On February 25, 2007, Jennifer won the Best Supporting Actress Oscar for her turn as Effie. She also won numerous other awards for the role, including a Golden Globe and a Screen Actors Guild Award.

In 2008, Hudson starred in the hit film Sex and the City alongside Sarah Jessica Parker playing Carrie's assistant who moved to NYC to "find love". Although only a small part, Jennifer made the character her own and also featured on the soundtrack with 'All Dressed In Love'. Hudson is scheduled to appear as Kathy Archenault in Winged Creatures, a film based on the novel by Roy Freirich, with Forest Whitaker, Guy Pearce, Kate Beckinsale, Dakota Fanning, Josh Hutcherson and Jackie Earle Haley. In January 2008 Jennifer began filming her fourth film The Secret Life of Bees as Rosaleen, the mother figure of Lily Owens (Dakota Fanning). Also starring in the film are fellow Oscar nominees Queen Latifah and Sophie Okonedo, as well as Alicia Keys.

The first single, "Spotlight", written and produced by Ne-Yo and Stargate, hit U.S. radio on June 9, 2008 and the following day was available as a music download.