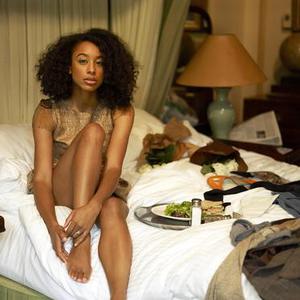 Corinne Bailey Rae (born Corinne Bailey on 26 February 1979) is a Grammy-winning English singer and songwriter who released her eponymous debut album "Corinne Bailey Rae" in February 2006. Rae was named the number-one predicted breakthrough act of 2006 in an annual BBC poll of music critics. Rae was born in Leeds, West Yorkshire to a Kittitian father and an English mother, and she was the eldest of three daughters.

Rae was born in Leeds, West Yorkshire to a Kittitian father and an English mother, and she was the eldest of three daughters. She began her musical career at school where she studied classical violin before she turned her attention to singing: "I started off singing in church, I suppose, but people think it must have been a gospel church because of the whole, you know, black assumption", she says in reference to her multiracial background. "But it wasn't gospel at all, it was just your regular Brethren church, very middle-class, where we would sing these harmonies every Sunday. It was always my favourite part of the service, the singing".

Rae later transferred to a Baptist church, where the choir would sing traditional hymns, and Primal Scream tunes. "We changed the words though", Rae states on her website. "We didn't want to offend the regular churchgoers, now did we?"

Performing in church broadened Rae's musical horizons, and her love affair with making music was solidified after a local youth leader offered to buy her an electric guitar. In her mid-teens, she became obsessed with rock legends Led Zeppelin, "I loved that band during my teens; I wanted, somehow, to follow in their footsteps, and to create music of my own".

Rae formed an all-female indie group called Helen, which was inspired by similar acts such as Veruca Salt and L7. "It was the first time I'd seen women with guitars. They were kinda sexy ? but feminist. I wanted to be like that, at the front of something".

The group raised eyebrows on several fronts; in the white male-dominated world of indie music, they were an all-female group fronted by a mixed-race singer from Leeds. The moniker "Helen" also drew attention, albeit for not all the right reasons: "What can I say? We were 15 years old, and thought that Helen was a cheeky, indie kind of thing to do. It seemed clever at the time. Admittedly, it seems less so now".

The group played many gigs around Leeds, including a memorable performance at Joseph's Well with Leeds-based band Swift, fronted by wildman rocker Royce Dunston. Despite this, the group became the first indie act to be signed to heavy metal record label Roadrunner Records, home to acts such as Slipknot, in 1995. The venture proved to be short-lived however after the bassist became pregnant and the group disbanded. "[Was I] Disappointed? I was gutted! I had no idea what to do next".

After the disappointment of Helen, Rae went on to attend the University of Leeds where she studied an English Literature degree. While at University, she began work as a hat check girl on an evening in her local jazz club. Permitted to sing on stage with the jazz band when business was slow, it was there that she discovered a different type of music that sent her on a different musical path: "I kept hearing this jazz and soul stuff and I realized I loved that music too". It was there also that she met saxophone player Jason Rae, whom she eventually married in 2001 at age twenty-two. "I was Corinne Bailey. I added on Rae, my husband's name, when I got married. There's no hyphen; stops it being posh!" Jason died in March 2008.

Over the space of the next three years, Rae began working on solo material ? this time steering away from her indie past and embarking on a more "soulful" path. She collaborated with Leeds-based funk group The New Mastersounds on the track "Your Love Is Mine", featured on their 2003 album Be Yourself, released via One Note Records. The following year she again worked with another Leeds-based group, Homecut Directive, on the song "Come the Revolution", which was the first single from the group's debut album.

In 2004, Rae got a breakthrough when she was signed by Global Talent Publishing and then approached by Craig David's mentor Mark Hill, from the duo The Artful Dodger, to appear on his new album better luck next time under his new alias, The stiX. The resulting collaboration, "Young and Foolish", was released in April 2005 and brought Rae to the attention of the major record label bosses. Rae released her debut single, "Like a Star", in November 2005 and her first album, Corinne Bailey Rae, in February 2006. In September 2006, Rae scooped two awards at the UK's MOBO Awards: "Best UK Newcomer" and "Best UK Female". Rae recorded a live session at Abbey Road Studios in July 2006 for Live From Abbey Road.

Rae also received three nominations at the 2007 Grammy Awards: "Record of the Year", "Song of the Year" (both for "Put Your Records On"), and "Best New Artist". During the ceremony, she performed "Like a Star" and joined John Legend and John Mayer in a collaborative performance, providing accompanying vocals to Legend's "Coming Home" and Mayer's "Gravity".[6] The poll's predictions subsequently came true, as she became only the fourth female British act in history to have her first album debut at number one. She has been nominated for Grammy Awards and BRIT Awards and won two MOBO Awards.

The Heart Speaks In Whispers