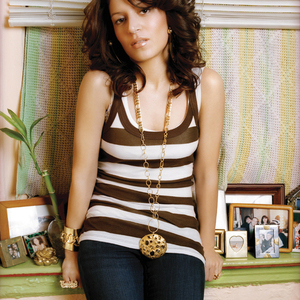 King was born Emily Cowings to an international jazz duo, Marion Cowings and Kim Kalesti. Emily and her brother were always exposed to music, especially jazz and classical sounds during their childhood. "It was an amazing experience," she says. "It was very challenging. We went from the fanciest hotels one day, to the dirtiest motels the next day -- you know, just living off a musicians paycheck. Also, being around so much incredible music. We were in the jazz world so I was with Dizzy Gillespie one day to Clark Terry the next day. It was my education."

As the daughter of two singers - one Italian, one African American - who performed internationally as a Jazz duo, King has always been exposed to music, its challenges and its rewards, from an early age. She always knew she would follow in her parents' footsteps. "I had a hard time in school," she says, "because I already knew what I wanted to do, so I was like, let me just get started." At age 16, King took two giant steps: She got her GED, and she started writing songs.

The music on her J Records debut, East Side Story, reveals roots that are both deep & ambitious. Kings words are packed with references to the wide range of great artists that inspired her - the Beatles, Nas, Sarah Vaughn, Radiohead & Michael Jackson. "Every record that I've ever heard has been an influence on me", she says.

The very first song that she completed, "Business Man" - a commentary on heartless capitalists - is a central moment on East Side Story. "I always thought if I write a song, it's not going to be about relationships," she says. "There are so many things in this world to talk about." She quickly advanced from banging around on a guitar in her apartment to performing on the local folk club circuit at such noted venues as the Bitter End and CBGB's Gallery.

In the meantime, King had discovered hip-hop and immersed herself in a culture that would add yet another ingredient to her musical mix. She met Sony Music publisher Bill Brown who introduced her to Sony writer/producer Chucky Thompson, a member of Bad Boy Entertainment's famed Hitman studio team who had recorded smashes with the likes of the Notorious BIG and Mary J. Blige. Thompson signed her to his production company, and together they began searching for the right sound to capture King's eclectic tastes and styles. After taking her demos to various labels, they signed with J Records and began the process of making a real album. Unable to be contained by any one category, Emily King represents the best of what our musical future might look like. Rather than concentrate on the differences between hip-hop and rock, party music and protest music, black and white, she's committing herself to finding common ground. "I'm just finding my own culture within myself," she says