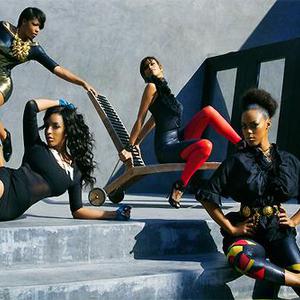 Comprised of Naomi, Sarah, Lesley and Binkie, Electrik Red hails from both New York City and Canada. Binkie and Lesley, who attended NYC's prestigious Laguardia School of Performing Arts, met the Toronto born Naomi and Sarah while individually performing as back-up dancers for artists like Usher, Mariah Carey and Ciara. After running into each other time and again at auditions and parties, the girls began to form a friendship. "We'd get together on our off time, and strategize," says Naomi.

"For some of us the ultimate was getting to work with an amazing performer, like a Janet Jackson or Madonna," explains Binkie. "But once you hit that mark it's like ok, now where do I want to take it? In our case, making music was the next plateau to aim for."

Although the move to step to the front of the stage may have seemed risky, the girls knew they were ready. "Everyone had lucrative careers," says Lesley, "but we had the confidence to say. Ok, let's stop all that and go off on our own with no help from anyone we'd worked for."

While their individual careers started with dance, the girls all grew up studying music. Binkie the business early from her father who was a member in the legendary Caribbean soul group Kid Creole and the Coconuts. Lesley began vocal training at age three while Sarah studied the piano as a young girl. Once they decided to form a group, the girls decided on the name Electrik Red which they felt exuded their collective sensuality.

In 2005, the foursome recorded a demo, and instead of calling on their long list of family friends and contacts in the music industry, Electrik Red decided to keep their new project under wraps. "What's crazy is that as many people we knew, we never really shopped the demo, we were protective of our music," says Naomi. "We felt like we couldn't go to an executive at a label until we feel like we had the best music possible. We believe you only have one shot."

In February of 2008, that one shot came when Electrik Red secured a deal with Def Jam. The girls were then paired with the hottest hit makers in town, The Dream and Tricky Stewart, who had worked with everyone from Mary J. Blige to Beyonce. "We all looked at each other and said 'Holy shit guys!'" remembers Binkie. "Look where we're at right now!"

The multi-talented group are now getting ready to release their debut album which has rapidly become heavily anticipated thanks to the massive buzz surrounding Electrik Red's first single, "Drink In My Cup." The slinky, yet hard hitting atmospheric "Drink In My Cup" showcases the girl's flowing harmonies and edgy phrasing. The mix of street and seduction makes it clear Electrik Red is taking mainstream R&B to an entirely new level.

"You know how back then the Spice Girls had girl power?" asks Sarah. "With us it's lady power, girl power on crack!" "I'd like people to hear four strong women who are very comfortable with their sexuality and with what we can bring to the world," says Lesley. "We will be heard damnit!"

How To Be A Lady Volume 1