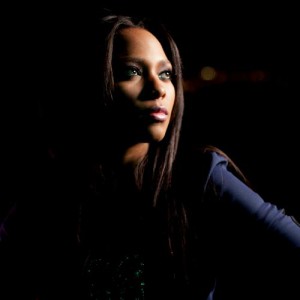 Teairra Mar&iacute; (born Teairra Maria Thomas on December 2, 1987 in Detroit, Michigan) is an American R&B singer, who is best known for her 2005 hits "Make Her Feel Good" and "No Daddy." According to a Billboard.com album review Teairra Mari has a 3.2 (C3-E6) octave vocal range. Mar? began her career at age 12, recording in her cousin's basement, in Holland, Michigan. She soon caught the attention of Big Mike, Ed K and Helluvah of Detroit's K.I.S.S.

According to a Billboard.com album review Teairra Mari has a 3.2 (C3-E6) octave vocal range.

Mar? began her career at age 12, recording in her cousin's basement, in Holland, Michigan. She soon caught the attention of Big Mike, Ed K and Helluvah of Detroit's K.I.S.S. Productions, which developed her from the age of 13 onward. Under Big Mike's guidance, Mar? spent every free moment in the studio, working with producers and songwriters like Helluvah, Disco D, Big Mike, Chaz M, Detail, Lyriq, AK, and J.R.

K.I.S.S. Productions arranged for Mar? to collaborate with artists such as Ray J, J-Kwon, Lola Damone, and Bee and for Mar? to appear on Detroit's Fox 2 Morning Show and UPN 50 Sports Rap. In October 2003, the label released Teairra's first album, an EP called Get Away, which included the title track plus four more songs (currently available only on this album) and became a local success.

In the meantime Teairra attended Detroit High School for The Fine and Performing Arts, she went on to attend Fitzgerald High School in Warren, MI right before getting her big break with Jay Z.

At the age of 16, K.I.S.S.' Big Mike felt that Mar? was ready for the big time, and he brought her in front of a who's who of label execs. Candy Tookes, a friend of Big Mike, introduced the pair to industry veteran Daryl Simmons in Atlanta, Georgia. Simmons then shared Mar?'s K.I.S.S. Productions-produced demo disc with Antonio "L.A." Reid, Chairman of The Island Def Jam Music Group. After hearing Teairra Mar? perform live, Reid offered her a contract on the spot.

Mar? worked with Jay-Z, in his first collaboration project since becoming president of Def Jam Records, to create "Make Her Feel Good", the hit single from her debut album on Roc-A-Fella/Def Jam. The second single "No Daddy" had a video that led to commercial success on MTV. The video spent 16 days on Total Request Live, peaking at #4.Teairra Mari's debut album, Roc-A-Fella Presents: Teairra Mari, was released in 2005.

She later appeared LL Cool J.'s "Preserve The Sexy." She also makes cameo appearances in music videos by 3LW ("Feelin' You") and Sammie ("You Should Be My Girl.") In 2006, Teairra Mari left Roc-A-Fella/Def Jam Records, and signed with Interscope Records.

In 2007, Mar? signed a lucrative deal with Violator but decided to split with them as she landed a new development deal with Fo'Reel Ent. under the wing of Cudda Love (the man responsible for Nelly's success). She is currently signed to Warner Bros. Records and is working on a new album titled "At That Point" which will be released in Februry 2010 with production by The Underdogs, The Runners, Jim Jonsin, Danja, Ne-Yo, Rodney "Darkchild" Jerkins, Ron "NEFF-U" Feemstar, The Movement, DJ Clue, Polow Da Don, Tony Dixon, Miscke, Tank, Pleasure P, and Rico Love, so far collaborations include Pleasure P, Flo Rida, Rick Ross, and Nicki Minaj while she is in discussion with Eve, and T.I. She also co-wrote songs with Keri Hilson, Solange Knowles and Sean Garrett. The Clutch member J. Que confirmed in an interview that the whole team are going to write songs for her forthcoming album.The promo single "Hunt 4 U" was released in early January with a video to follow shortly after while the official first single is "Cause A Scene" featuring Flo Rida. Aside from music, Teairra is currently the spokemodel for the new clothing line Jean Addicts which is set to launch later this year, and she completed a film called The Magnificent Cooly-T.

After the failure of Cause a Scene to chart, At That Point was pushed back from its original release date of July 2009 to October 20, however it was cancelled again, and Teairra sent another song tilted "Sponsor" to raidos which featured Gucci Manne and Soulja Boy, it was produced by The Clutch. Teairra finally made her chart debut on the rnb/hip hop charts, and sponsro is sitting at #38. At That Point is supposed to be released 29th of June. With one more official singl on the way "Automatic" featuring Nicki Minaj.

Point Of No Return

The Night Before X-Mas