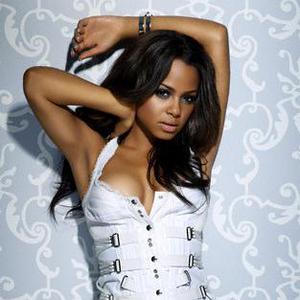 Christina Milian (born Christine Marie Flores on September 26, 1981) is an American rnb and pop singer-songwriter, record producer, dancer, actress, and former MTV VJ. Milian was born in Jersey City, New Jersey, United States, to Cuban parents Don and Carmen. She has two younger sisters, Dannielle and Elizabeth. Her family moved to Waldorf, Maryland soon after her birth and she set her heart on an entertainment career at the age of four.

Milian was born in Jersey City, New Jersey, United States, to Cuban parents Don and Carmen. She has two younger sisters, Dannielle and Elizabeth. Her family moved to Waldorf, Maryland soon after her birth and she set her heart on an entertainment career at the age of four. Milian shot commercials for (Wendy's, Honeycomb) and played the lead role in the musical Annie before moving to Los Angeles at thirteen to pursue an acting career. Soon after the family's move, her father divorced her mother. Milian graduated from Westlake High School in Waldorf, Maryland; and also attended Matthew Henson Middle School in Indian Head, Maryland.

In 2000, Milian made her first official musical appearance on Ja Rule's second studio album Rule 3:36, performing guest vocals on his song "Between me and you". Released as the album's lead single in 2001, the track managed to peak at #11 on the Billboard Hot 100 and in the top 30 of the UK singles chart, building Milian's reputation as a singer. Milian also appeared in M?a's video for "Best Of Me" playing a friend. In the meantime Milian co-wrote and provided extensive backing vocals for the track "Play" for Jennifer Lopez's 2001 album J. Lo which became another success. Milian would later pass down the song to Lopez because of already having a club song with "AM to PM" as promotion. She also went on to co-write "Same Ol' Same Ol", the first single from girl group PYT's debut album Down With Me.

In 2001, Milian eventually released her first solo single, "AM to PM", off her self-titled debut album. The song became a worldwide hit reaching the top 5 in the UK and Denmark, top 10 in the Netherlands, and top 30 on the U.S. Billboard Hot 100 and in Australia. The success of "AM to PM" sparked the international release of the Christina Milian album which she co-wrote and produced, although not in the United States. The second single "When You Look at Me" was another international hit reaching the top 5 in the UK, Netherlands, and Ireland and making the top 40 in Denmark, Germany, Australia, and France. Although a music video for the album's third single "Get Away" (another collaboration with Ja Rule) was filmed in Paris, the single was not released officially.

Afterwards Milian also was featured on the track "It's All Gravy", a duet with British Rapper Romeo of the UK garage group So Solid Crew. While the song was another UK top ten hit single in 2002, Milian provided the theme song for the hit Disney series Kim Possible, "Call Me, Beep Me" later that year. In 2002, she also collaborated with Hilary Duff on her Christmas album Santa Claus Lane, on the song "I Heard Santa on the Radio."

In 2003, Milian started recording songs with Rodney "Darkchild" Jerkins, Bloodshy & Avant and Cory Rooney for her first U.S. release, It's About Time (whose title is a direct reference to how long it had taken for one of her albums to be released domestically). The album was released to positive reviews on July 13, 2004, but failed to receive immense commercial success when it debuted at #21 in the UK and #14 on the Billboard 200 album chart, selling over 36,000 copies in the first week only. While It's about Time ended up with lackluster sales of 394,000 copies in the United States, it gained prominence when it received a Grammy nomination for "Best Contemporary R&B Album" in 2005.

The album's first single, "Dip It Low" (written by singer Teedra Moses and Black Eyed Peas producer Poli Paul) however, became Milian's biggest hit to date, when it peaked at #1 on a world composite dance chart (compiled on data from the U.S., UK, Germany, Japan, Italy, and Australia), simultaneously reaching #2 in the UK, #5 in the U.S., #7 in New Zealand and the top 20 in Germany, Switzerland, Ireland, Norway and the Netherlands. The single was also certified Gold by the RIAA for digital sales. The album's second and final single, "Whatever U Want" (featuring Joe Budden) failed to reprise the success of the lead single, but again reached the top 10 in the UK as well as charting on the Billboard Hot 100.

Milian's third studio album So Amazin' was released on May 16, 2006. Milian worked with Cool & Dre on the majority of the production of the album, and the project was finished with additional help from Rich Harrison and executive producers Jay-Z and LA Reid. Christina mentions working with Cool & Dre for the entire album "made a more consistent, very real and personal album" compared to her other works. The record's first single "Say I" featured rapper Young Jeezy and was released in March 2006 as a single and video. The song made it to number 1 on iTunes UK Music Store and was number 1 on AOL music, but altogether saw moderate success only with peak positions on #21 in the United States, #4 in the UK and #45 in Australia.

While So Amazin' failed to reach the top 10 when it debuted at #11 on the Billboard 200 albums chart, the album saw minor international success only, peaking at #67 in the UK inter alia. With "Gonna Tell Everybody" a second single from the album was chosen, but Island Def Jam neither agreed to film a music video nor booked promotional appearances for Milian to promote the song. In June 2006, instead, Milian's representative confirmed that she had left the Island Def Jam record label due to "creative differences" - though disappointing album sales were believed to be the main factor, since the album sold less than 500,000 worldwide (over 130,000 in United States).

Due to the low sales of So Amazin', Milian released her first compilation album, titled The Best of Christina Milian on November 22, 2006. The album was released under the Universal International label. The album includes her hit singles and songs that she hand picked herself from her first three studio albums, Christina Milian, It's About Time, and So Amazin', though, only one track, Say I, was chosen from So Amazin', possibly due to the fact that it is her lowest selling album. The album was only released in Japan and some other Asian countries; but was not released in the U.S. or Europe. The album peaked at a disappointing #29 on the Japanese ORICON Albums Chart, and has sold only 38,078 copies to date.

Following her departure from Island Def Jam Music Group, Milian signed with MySpace Records in 2008. She began writing songs and recording in the studio with numerous different producers, including Cool & Dre, J. R. Rotem, The Runners, Danja, Madd Scientist, T-Pain, Jim Jonsin and Toby Gad. Milian was featured on the cover of Rap-Up's 2008 Winter issue, in which she announced that the album's title was Dream in Color. A single was released in October 2008, ballad "Us Against the World". It was written by Milian and produced by Madd Scientist. The single, described by Milian as a "cinematic power ballad", premiered via MySpace on October 6, 2008, and was made available by digital download the next day. Milian felt that Madd Scientist "brought the best out of me" while producing "Us Against the World", and "was really able to do some amazing things with my vocals".

After recording songs with the aforementioned producers, Milian took a break from music and started filming Bring It On: Fight to the Finish. When Milian returned to music, she concentrated on promoting her single "Us Against the World", and shot its music video. Since then, Milian said that she became "a little bit more meticulous with what I feel deserved to be on the album", and resumed recording. Songs recorded for the album included the 90's Madonna-styled ballad "Stay", Euro-club record "Tug of War" and the feel-good song "Diamonds", which featured Kanye West. Other features included Rick Ross on the Cool & Dre produced track "Blissful", and Pitbull.

In early 2009, Milian began working with The-Dream, Tricky Stewart, and L.O.S. Da Maestro, which led to her signing a deal with Radio Killa Records. Milian revealed that aside from "Us Against the World", The-Dream and Tricky Stewart would be producing all the songs on her album. In March 2009, Milian changed the album's title to Elope. Regarding the album's title change, Milian explained, "the definition of elope is to run away secretly with one's beloved. This next album is about taking responsibility for yourself and making your own decisions." In June 2009, The-Dream said that the album was finished. Upon completion of the album, Milian said it represented "independence, not having to answer to any type of 'authority', being a woman at her best and feeling very confident". She said that fans could expect an "edgy sound with lots of strong powerful anthems. Big up tempos, R&B and Pop at it's [sic] best and two big ballads".

In August 2009, Milian confirmed that she had signed a deal to release Elope through Interscope Records, with a 2010 release date. Originally scheduled to be released in 2009, Tricky Stewart explained the delay, saying "we just got our label deals done, so the reason why some of these projects got delayed had to do with technicalities and things of that nature". The album has been furthered delayed because of Milian's marriage to The-Dream and her pregnancy. In January 2010, Milian said that she was going back into the studio in the summer to record more material. Although the album had already been finished when Milian took a break for her pregnancy, she wanted to "go back and re-do some of the music and make some new songs and find my new inspiration". In October 2009, Tricky Stewart said that another single had yet to be chosen, and that it would be the first single off Elope. Reported choices for the first single include "Zipper", "I'm A Cheat", and "Supersonic".

On February 26, 2010, Milian gave birth to their daughter Violet, although in July 2010, The-Dream announced that he and Milian had separated. Milian was scheduled to resume recording in July 2010 to complete the album; however, after her separation from The-Dream, Milian opted to focus on her acting career. Despite the separation, Milian and The-Dream continued to "work together and write together". At the 2010 Los Angeles Fashion Week, Milian performed "Zipper" and "Dip It Low". At the 2010 American Music Awards, Milian announced that her untitled fourth studio album will be released in 2011.

It's About Time (Regular Edition)