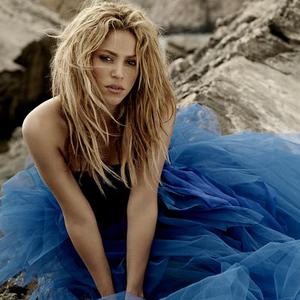 Shakira Isabel Mebarak Ripoll (born February 2, 1977), known simply as Shakira, is a Grammy-award winning Colombian singer-songwriter, musician, composer, record producer, music-video director, dancer, choreographer, instrumentalist and philanthropist who has sold over sixty million records worldwide. She has won ten Grammy awards, twelve Billboard Music Awards and has been nominated for a Golden Globe. She has been in the music industry since 1990, releasing her first album the following year.

A child prodigy, she began writing poems and songs at age four and taught herself the guitar at age ten. The death of a half sibling and her father's reaction to it inspired her to write her first full song at age eight.

Little known outside her native Colombia, it wasn't until 1995 when Shakira took full creative control over her music, a fusion of rock and dance pop with both deeply personal and biting political lyrics. The approach yielded two multiplatinum albums. In 2001, she broke through into the English-speaking market with the release of her first album in that language, Laundry Service, which she wrote and produced herself and which has sold 3 million copies in the United States and 13 million copies worldwide. The album's massive sales came in large part thanks to the worldwide hit, "Whenever, Wherever" a dance song with unique Andean instrumentation which soon became one of the highest selling singles of the 21st century.

Shakira is half Lebanese, one quarter Spanish, and one quarter Italian. She was born to a Colombian mother of Catalan and Italian descent, Nidia del Carmen Ripoll Torrado, and a Lebanese father, William Mebarak Chadid, in Barranquilla, Colombia, where she says she grew up among the Lebanese and Italian communities. Her father was born in Lebanon, and immediately after that, his family migrated to New York, but he soon migrated to Colombia. Shakira, which means "grateful" in Arabic (?????), is named after her paternal grandmother. She was one of seven siblings, one of whom is her road manager. Shakira attended a Catholic school and in second grade was rejected for the school choir because her vibrato was too strong.[2] She began writing and composing music at the age of eight and later choreographed dance routines. At school, she says she had been known as "the belly dancer girl", as she would demonstrate a number she learned every Friday at school. "That's how I discovered my passion for live performance," she says.[3] One of the first songs she wrote was called "Tus Gafas Oscuras" (Your Dark Glasses), which was about her father's grief over a son who had died in a car accident.

Between the ages of ten and thirteen Shakira was invited to various events in Barranquilla and gained some recognition in the area. It was at about this time that she met local theater producer Monica Ariza, who was impressed with her and as a result tried to help her career. During a flight from Barranquilla to Bogot?, Ariza convinced Sony Colombia executive Ciro Vargas to hold an audition for Shakira in a motel lobby. Vargas held Shakira in high regard and, returning to the Sony office, gave the cassette to a song and artist director. However, the director was not overly excited and thought Shakira was something of "a lost cause". Vargas, not daunted, was still convinced that Shakira had talent, and set up an audition in Bogot?. He arranged for Sony Colombia executives to arrive at the audition, with the idea of surprising them with Shakira's performance. She performed three songs for the executives and impressed them enough for her to be signed to record three albums.

Magia (Magic) was Shakira's debut album, recorded with Sony Colombia in 1991, when she was 13. The album did not fare well commercially, selling less than one thousand copies. After Magia, Shakira released Peligro (Danger) in 1993. The album was better received than Magia, though it was considered a commercial failure, due to Shakira's refusal to advertise it.

Shakira then decided to take a hiatus from recording so that she could graduate from high school.

Shakira returned to recording in 1995, supported by a new confessional and Alanis Morissette-oriented persona that affected some of her next albums, and made her third studio one, Pies Descalzos (Bare Feet), bring her great fame in Latin America. The singles "Estoy Aqu?" (I'm Here), "Pies Descalzos, Sue?os Blancos" (Bare Feet, White Dreams), and "D?nde Est?s Coraz?n?" (Where Are You, My Heart?) became pop culture icons. Pies Descalzos sold more than 4 million copies, which prompted the release of a remix album, titled simply The Remixes, which sold more than a million copies. The Remixes also included Portuguese versions of some of her best-known songs, which were recorded because of her success in the Brazilian market.

Her fourth album, ?D?nde Est?n Los Ladrones? (Where Are The Thieves?), was released in 1998. It was produced by Emilio Estefan, reportedly cost US$3 million, and had more of a polished sound than Pies Descalzos. It was even more successful and solidified her as one of the major Latin artists of the 1990s. She began to gain more fans in non-Spanish-speaking countries like France, Switzerland, Canada, and especially the United States. Eight of the album's eleven tracks became singles, including "Ciega, Sordomuda"(Blind, Deaf, and Mute), "Moscas En La Casa" (Flies in the House), "No Creo" (I Don't Believe), "Inevitable", "T?" (You), "Si Te Vas" (If You Leave), "Octavo D?a" (Eighth Day), and the world-famous "Ojos As?"(Eyes Like Yours). Shakira's first live album, MTV Unplugged, was composed of "Estoy Aqu?" and the songs from ?D?nde Est?n Los Ladrones?.

In 2001, upon the success of ?D?nde Est?n Los Ladrones?, Shakira began working on a crossover album to the English language. Collaborating with Gloria Estefan, Shakira wrote and recorded English versions of the tracks from ?D?nde Est?n Los Ladrones?. However, Shakira later decided against using translations of older songs for the album and worked for over a year on new material for the album. The result was Laundry Service. Although it was created for the intent of selling to an English language market, the rock and Spanish dance-influenced album also featured four Spanish songs, including "Que Me Quedes T?" (I Hope You Stay With Me). Some critics claimed that Shakira's English skills were too weak for her to write in it, but Laundry Service was a success, with more than 13 million sales worldwide, yielding the worldwide hit "Whenever, Wherever" and singles "Underneath Your Clothes" (a Canadian number-one), "Te Dejo Madrid" (I Leave You Madrid), "Objection (Tango)", and "The One". The album and its singles helped to establish Shakira's musical presence in the mainstream North American market.

Shakira stayed out of the spotlight for 2 and a half years, notably changing her hair style. She later announced Oral Fixation 1 and 2 due in 2005. Fijaci?n Oral Vol. 1 was released on June 6, 2005 in Europe and on June 7, 2005 in North America and Australia. The lead single "La Tortura" (English: The Torture, featuring Alejandro Sanz) eventually reached number one in Spain and number twenty-three on the U.S. Billboard Hot 100. In Canada, "La Tortura" also became the highest-charting Spanish song when it debuted and peaked at number twenty-one. Its success across the rest of the world was widespread and it managed to peak within the top ten of the majority of the charts it entered. In the U.S., "La Tortura" spent a record twenty-five weeks at number one on the Billboard Hot Latin Tracks chart.

Fijaci?n Oral Vol. 1 was simultaneously released in Latin America. It debuted at number one in Spain and at number four on the U.S. Billboard 200. It was also well-received in non-Spanish speaking countries such as Italy, Greece and Germany, where it reached number one, Austria, where it reached number three, and Canada and Hungary, where it reached number seven. The second single from Fijaci?n Oral Vol. 1, "No" (English: No), was released in September 2005, and peaked at number one in Spain and Colombia, for fourteen non-consecutive weeks. So far, Fijaci?n Oral Vol. 1 has sold five million copies worldwide. Her third single from "Fijaci?n Oral vol. 1", D?a de Enero, is dedicated to her fiance, Antonio de la R?a. This single was number one in some countries in Latin America, but it hadn't got success like "La Tortura" and "No". She also performed "La Tortura" at the 2005 MTV Video Music Awards in Miami with Alejandro Sanz. It was the first ever Spanish performance at the VMA's.

Shakira's second English album Oral Fixation Vol. 2 was released on November 29, 2005 in North America and Australia, and also at this time in Continental Europe. While "Don't Bother" was warmly received by music critics as the album's lead single, it failed to peak within the U.S. top 40. The second single "Hips Don't Lie" (featuring Wyclef Jean) became her first single to reach number one on the U.S. Billboard Hot 100 and UK Singles Chart. On March 28, 2006, she re-released Oral Fixation Vol. 2 in the U.S. and released it June 19, 2006. Shakira also had the collaboration of Argentinian Rock en Espa?ol legend Gustavo Cerati on 2 tracks of both Oral Fixation albums.

In 2000, Shakira started dating Antonio de la R?a, the son of then president of Argentina Fernando de la R?a, a romance that made headline news throughout Latin America. In March of 2001, he proposed to her. During Fernando De la R?a's presidency, the economy of Argentina collapsed, leading to the subsequently violent December 2001 riots; in response to the turmoil, Tower Records decided to no longer sell Shakira's albums [6] in Argentina as Antonio was directly involved in the management of his father's administration. De la R?a and Shakira remain engaged, with future plans to marry.

Shakira is well-known for her dancing in various music videos. The moves are based on the art of belly dancing, a part of her Lebanese heritage, which Shakira says she learned as a young teen to overcome her shyness. The intense training has afforded her a fluidity in her body movement most seen in the video to her hit "La Tortura". In an MTV interview, she said people told her she never moved her chest when dancing, so she danced with her chest (as well as her usual belly dancing moves) in the videos for "La Tortura" and "Hips Don't Lie".

She has had several belly dance choreographers, including award-winning Bellydance Superstar Bozenka. As her MTV 'The Making of...' special shows, she worked with Jamie King for the choreography, but ended up creating most of it herself.

Try Everything (From Zootopia) (CDS)