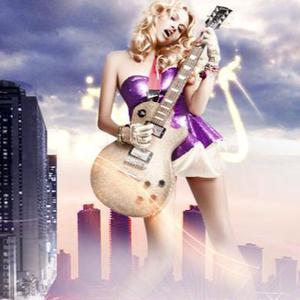 Paulina Susana Rubio (born June 17, 1971 in Mexico City) is a Mexican singer. She is the daughter of Susana Dosamantes, a Mexican actress of soap operas. Rubio's music is popular in Latin America, Spain, United States, Europe and Asia. She began her career when she was nine years old in 1980, debuting with a music group called Timbiriche, recording ten albums with them. Rubio turned to acting in soap operas on Televisa.

In 1990, Rubio left Timbiriche and focused on launching a solo career. In 1992, she released her first album titled "La chica dorada". In 1993 she released "24 kilates". In 1995, "El tiempo es oro". In 1996 she released "Planeta Paulina" and in 2000, "Paulina". This album was nominated at the second annual Latin Grammy Awards, and in 2002 "Border girl", which included her first foray into English language-Pop. Her smash hit "Don't Say Goodbye" rose to the number one spot on the Billboard list. Although her debut English album did not launch her into superstardom, it did give Paulina the international recognition she sought for years.

In 2004, Rubio returned with a Spanish language album titled Pau-latina. Rubio explained that "Pau-latina" has several meanings, such as similarity to her name Paulina, the Catalan word pau meaning peace, and latina. Recently songs on the album such as "Algo Tienes" and "Dame Otro Tequila" have become major hits making her one of the best selling female pop artist of M?xico and Latin America. With Paulatina, Rubio received a "Premio Lo Nuestro", as the Best Female of the Year and Premios Juventud, given by the audience who vote online and polls. Paulina Rubio is to this day a household name in the Spanish speaking world.

In July 2006, Paulina released the first single of her album "Ananda,"(meaning "Happiness", in sansckit) "Ni Una Sola Palabra." "Nada puede cambiarme" and "Ay?dame" are also hits from the album "Ananda", the one with Paulina Rubio afirms that she's one of the best latin american artists.

By 2009, Paulina released her ninth album named "Gran City Pop". "Causa y efecto" was the first single of the album and both (album and single) peaked the 1st places at Billboard Magazine, iTunes, and latinamerican radio charts.

On 2011 Paulina released her new studio album named Brava, which first single "Me gustas tanto" is produced by Red One.