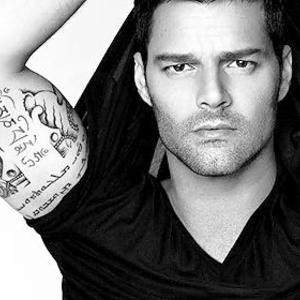 Ricky Martin (born in San Juan, Puerto Rico on December 24, 1971 as Enrique Martin Morales), is a successful Puerto Rican pop singer who rose to fame, first as a member of the Latin boy band Menudo, then as a solo artist since 1990. He has sold over 70 million records since the start of his career. He is considered a major star in the world of Latin Pop, and is considered to have opened the doors for some of his fellow Latin American singers like Jennifer Lopez and Shakira.

Ricky Martin came out as gay on March 29, 2010 writing on his website: "I am proud to say that I am a fortunate homosexual man. I am very blessed to be who I am."

He attended Sagrado Coraz?n School and was an average student. He participated in school extra-curricular activities and sang in the school choir, where he began to realize that his talent captivated the audiences. Through the encouragement of his father, he began to take voice lessons, and auditioned for television advertising spots.

Martin first achieved worldwide success with his selection to replace Ricky Melendez in the Latin boy band Menudo from 1984 until 1989. His meteoric ascent to fame started in Menudo's homebase, Caguas, site of his first concert. He signed with Sony in 1990.

After he left Menudo, he decided to continue his career. He moved to Mexico City where he started acting, first in theater in productions like Mam? ama el rock, and Los tenis Rojos with Ang?lica Mar?a and Ang?lica Vale. He starred in telenovelas such as Alcanzar una Estrella and performed in the music group Mu?ecos De Papel of that production. In 1994, he moved to Los Angeles, California. He received a role as bartender (Miguel Morez) in the American soap opera General Hospital.

Ricky established himself in Miami and connected with music creator Desmond Child, former Menudo band-mate Robi Draco Rosa and Puerto Rican agent Angelo Medina. With these 2 in tow, Ricky created hits like "Mar&iacute;a", "The Cup of Life", and "Livin' La Vida Loca". He sang "The Cup of Life" during a World Cup broadcast that gave him worldwide exposure, but it was "Livin' La Vida Loca" which became a massive crossover hit, made him popular around the world and propelled him into the covers of Tiger Beat and many other major magazines worldwide.

One of Ricky's career high points was the recording of the Spanglish ballad "Cuidado" ("Be Careful") with Madonna and William Orbit. The original version was written with Patrick Leonard and the first demo remains just one of many unreleased Madonna songs.

Ricky was chosen, along with F?lix Trinidad in 1999, to lead Puerto Rico's worldwide tourism campaign, both exemplifying Puerto Rico's youthfulness, enthusiasm and "never give up" character. In 2003, Martin announced that he and his agent, Angelo Medina, had parted ways. In February of 2004, Martin received a Lifetime Achievement Award at the Premios Lo Nuestro in Miami.

Martin recently adopted three little girls from India. The Ricky Martin Foundation created a project called People For Children, which aims to eliminate the industry of sexual exploitation and trafficking of children worldwide. His first benefit was held in Mexico City on November 10, 2005.

On October 11, 2005 Martin came out with his first English language album since 2000's Sound Loaded and the tenth album of his career. Most of the songs on the album, called Life, were co-written by Martin. Martin feels that the album is one of his more personal albums, saying "I was really in touch with my emotions. I think this album is very multi-layered, just like life is. It's about feeling anger. It's about feeling joy. It's about feeling uncertainty. It's about cuping a feeling. It's about feeling. And all my emotions are part of this production." The album debuted at #6 on the Billboard Top 200 Albums chart. The first single of the album, "I Don't Care" (Spanish version: ?Qu? M?s Da?), featuring Fat Joe and Amerie, was Ricky's first single since 2003's ?Tal Vez.? He plans to release his next single called Drop It on Me.