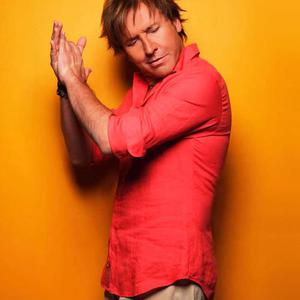 Ricardo Montaner (born as Hector Eduardo Reglero Montaner on September 8, 1957) is an Argentine-Venezuelan singer and songwriter. Starting his career in the early 80s, he has already released more than 15 albums with numerous successful singles and over 7 million record worldwide. Montaner was born as H?ctor Eduardo Reglero Montaner, in Valent?n Alsina, Buenos Aires, Argentina. However, he moved to Venezuela when he was 6 years old.

Montaner was born as H?ctor Eduardo Reglero Montaner, in Valent?n Alsina, Buenos Aires, Argentina. However, he moved to Venezuela when he was 6 years old. During his youth he performed in the church chorus in the city of Maracaibo. In 1983, he released his first album titled Cada D&iacute;a. Although the album was not a great success, it was a start for Montaner's career. He describes this album:"as his own version of death metal"

It wasn't until 1987 when Montaner became widely popular in Venezuela with the singles "Yo Que Te Am&eacute;" and "Vamos A Dejarlo" belonging to his self-titled album.

The following year he came out with Ricardo Montaner 2 which featured hit songs like "Tan Enamorados" and "A Donde Va El Amor". At the same time, he acted in the popular soap opera Ni?a Bonita. This also became a tool to make his songs known to the rest of Latin America. He won 4 platinum albums in Argentina alone. His next two albums, Un Toque De Misterio and En El &Uacute;ltimo Lugar Del Mundo, became classics of the popular music in Mexico, Central and South America with hits such as "La Cima Del Cielo", "Me Va a Extra&ntilde;ar", "D&eacute;jame Llorar" and "Ser&aacute;".

By 1992 Ricardo decided to hit the Spanish Caribbean with Los Hijos Del Sol, an album that contained songs like "Castillo Azul", "Honda" and "Piel Adentro". That year, he also recorded a duet with Michelle, which was the Latinamerican version for the Aladdin song "A Whole New World" titled "Un Mundo Ideal".

Although Montaner has written most of his songs he has worked closely with other great song writers in Latin America such as Pablo Manavello, Ilan Chester and Oscar G?mez. But in 1994, Ricardo Montaner wrote and produced all the songs in his album Una ma&ntilde;ana y un camino, which became popular only years after his release due to the lack of promotion by his new record label EMI Latin, with which Ricardo would also release Viene Del Alma in 1995, an Italian pop flavored album. Also in 1995 he teamed up with Yolandita Monge to establish a Guinness World Record for performing 3 concerts in different cities on the same day in Puerto Rico. This was only possible by air transportation via helicopter from stage to stage.

By 1997, Montaner was already a well established artist in the Spanish speaking music world and could give himself the luxury of experimenting with other styles of music, without forgetting the roots that had made him so popular a decade earlier. Working one more time with Pablo Manavello and with a new record company, Warner Music proved to be the promoter Ricardo was expecting for. Es As&iacute; brought Ricardo much popularity in the United States Spanish speaking areas and allowed Montaner to tour more than 17 countries in Latin America making him even more popular in Spain. Songs like "La Mujer De Mi Vida", "Para Llorar" and "Es As&iacute;" became very popular all around.

In 1999, Montaner recorded his best album ever with his past hits decorated with the strings of the London Metropolitan Orchestra. This proved to be very successful and sold over 1 million copies. Ricardo made another attempt in 2001 with Sue&ntilde;o Repetido that included the bolero style song "B&eacute;same" arranged by Bebu Silvetti which became a hit all over the world. Future works with Juan Carlos Calder?n, Kike Santander and Silvetti would be the key for Ricardo to move his songs and popularity to another level in 2002, 2003 and 2004.

2002's Suma (Bolero style songs) and 2003's Prohibido Olvidar (balada pop) had fair results in terms of sales and acceptance. "Si tuviera que elegir" in Suma was written for his daughter. In 2003 he broke the record for the most concerts on a same tour in the theater of Bellas Artes in Puerto Rico. He sold out 18 concerts breaking his past record of 12, which also held it Yolandita Monge and Ricardo Arjona.

In 2004, he made another album with the London Metropolitan Orchestra named Con La London Metropolitan Orchestra Vol. 2 featuring his latest hits songs and two exclusive songs such as "Desesperado" and "Esta Escrito". In 2005, Montaner launched Todo Y Nada which featured the songs "Cuando A Mi Lado Estas" and "Nada". For this album he's already nominated in the Latin Grammys with album and song of the year for "Cuando A Mi Lado Estas". "Amarte es mi pecado" and "Heridas de Amor" are non-album songs that have been chosen to be the theme songs on two very popular Mexican soap operas and that much popular have become these songs.

Ricardo Montaner has sold over 22 million albums, and keeps breaking records in arenas and theaters all over the world.