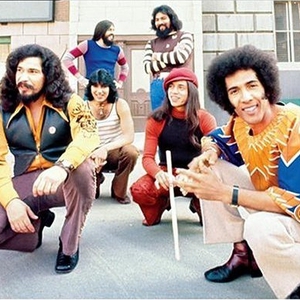 An East L.A Mexican-American band who started out on the circuit as the V.I.P.'s in the late 60s, El Chicano signed to Kapp Records and had a Billboard top 40 instrumental hit in 1970 with a Latin Rock reworking of Gerald Wilson's Viva Tirado. While they've had numerous lineup changes through the decades, the initial band members in their early 70's heyday included the late Bobby Espinosa (keyboards/vocals), Mickey Lespron (guitar/vocals), Freddie Sanchez (bass/vocals), and Andre Baeza and John De Luna (percussion).

After the Viva Tirado LP, El Chicano went on to record several more albums for MCA, including 1971's Revolucion, 1972's Celebration, 1973's El Chicano, 1974's Cinco, 1975's The Best Of Everything, and 1976's Pyramid of Love & Friends. They remained active releasing indie titles and performing on the oldies concert circuit until the death of founding member Bobby Espinosa in 2010.


Along the way, El Chicano had many personnel changes; members who didn't join until the '70s included Ersi Arvizu (lead vocals), Hector "Rudy" Regalado (timbales, vocals), Max Garduno (congas), Danny Lamonte (drums), Brian Magness (bass), Joe Perreira (bass), Jerry Salas (lead vocals, guitar), Rudy Salas (guitar), and Steve Salas (lead vocals), among others. (The Salas brothers went on to join another East L.A. band, Tierra, which was an El Chicano spinoff and is best-known for its hit 1980 cover of The Intruders' Philadelphia soul ballad "Together"). After creating a buzz in East L.A. in the late '60s, El Chicano signed with MCA in 1970 and recorded its debut album, Viva Tirado. The instrumental title song, which was written by jazz pianist Gerald Wilson, was released as a single and became El Chicano's biggest hit; the recording reached number 28 on Billboard's pop singles chart and number 20 on its R&B singles chart. On regional L.A. charts, "Viva Tirado" spent about 12 weeks at number one. "Viva Tirado" (which was inspired by Mexican bullfighter Jose Ramon Tirado) was a rarity; in the '60s and '70s, one rarely saw any type of jazz instrumental ? straight-ahead, fusion, soul-jazz, or otherwise ? climbing that high up the national Billboard charts. When a jazz instrumental became a hit single in the pop or R&B markets, it was the exception instead of the rule. While the "Viva Tirado" single didn't make El Chicano national superstars ? they were never as big as Santana ? the band did acquire a loyal cult following and was especially popular in the Mexican-American neighborhoods of the southwestern United States. El Chicano's second biggest hit came in 1973 when MCA released the brown-eyed soul classic "Tell Her She's Lovely" as a single. Nationally, the tune (which features Jerry Salas on lead vocals) wasn't a major hit; "Tell Her She's Lovely" only reached number 40 on Billboard's pop singles chart and number 98 on the magazine's R&B singles chart. But in Mexican-American neighborhoods, the song was huge ? among Chicano Baby Boomers, "Tell Her She's Lovely" was as popular as War's big '70s hits. The band also composed the theme to Robert Blake's 1970s television cop show ?Baretta" . El Chicano's contract with MCA ended in 1976; that year, the band recorded its first post-MCA album, This Is...El Chicano, for the independent Shady Brooke label (where the L.A. residents enjoyed more creative control than they had during their six years at MCA). The band's next LP, Look of Love, was released on Musidisc in 1977; then in the early '80s, El Chicano briefly recorded for Columbia, which released the romantic blue-eyed soul tune "Do You Want Me" as a single in 1983. Although not a national chart-buster, the song became a minor hit (primarily in Mexican-American areas). El Chicano, enjoyed newfound attention in the 1990s after rapper Kid Frost sampled "Viva Tirado" for his hit "La Raza." and the band made a long overdue return to the studio with 1998's album Painting The Moment which showed some creeping influences of smooth jazz into the band's sound. Released on Thump, that CD marked the return of original lead guitarist Mickey Lespron, who had not recorded with El Chicano since the '70s.

Inevitably, El Chicano (whose Spanish name means "the Chicano" or "the Mexican-American") has been heavily influenced and compared to latin rock pioneer Carlos Santana. Despite similarities in approach, El Chicano has displayed a distinct style of its own and Santana is certainly not the band's only influence. Over the years, El Chicano has been stylistically affected by everyone from Chicano soulsters like Cannibal & the Headhunters and Thee Midniters to Latin soul-jazz favorite Pucho to salsa heavyweights such as Tito Puente, Ray Barretto, and Mongo Santamaria. El Chicano's members were not only affected by the Mexican-American experience, they were also well aware of what Cuban and Puerto Rican musicians were doing on the East Coast and in the Caribbean, as well as contemporary jazz and funk artists.

This Is... El Chicano

Pyramid Of Love And Friends (Vinyl)

The Best Of Everything