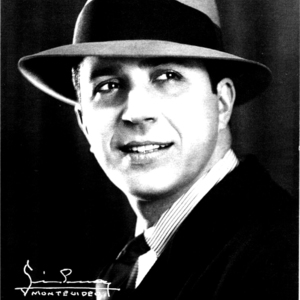 Carlos Gardel (1890 ? 1935) was an enormously popular tango singer killed in an aeroplane crash at the height of his career. For many music fans, Gardel embodies the soul of the tango, a musical form and dance which evolved in the barrios of Buenos Aires, Argentina, at the end of the 19th century. Gardel possessed a baritone voice deployed with unerring musicality and dramatic phrasing, creating miniature masterpieces among the hundreds of three-minute tangos which he recorded during his lifetime.

Gardel began his career singing in bars and at private parties, and in 1911 formed a duet with Francisco Martino, and after with Jos&eacute; Razzano (which would last until 1925), singing a wide repertory. Gardel made the music his own by inventing the tango-canci?n in 1917 with 'Mi Noche Triste', a theme by Pascual Contursi and Samuel Castriota, which sold 100,000 copies and was a hit throughout Latin America. Gardel went on to tour Argentina, Uruguay, Chile, Brazil, Puerto Rico, Venezuela, Colombia and made appearances in Barcelona, Madrid, Paris and New York. He sold 70,000 records in the first three months of a 1928 visit to Paris. As his popularity grew, he made a number of films for the Paramount in France and the USA, which were essentially vehicles for his singing and matin?e-idol looks.

When Gardel and his collaborator Le Pera were killed in an airplane crash in Medell?n, Colombia in 1935, millions of his fans throughout Latin America went into mourning. Hordes of people thronged to pay their respects as the singer's body travelled via Colombia, New York and Rio de Janeiro to its final resting place in La Chacarita cemetery in Buenos Aires.

Gardel is still revered from Buenos Aires to Tokyo, where people like to say that "he sings better every day." His fans still like to place a lit cigarette in the fingers of the life-sized statue which adorns his tomb. One of Gardel's favourite phrases, 'Veinte a?os no es nada' (Twenty years is nothing) became a famous saying across Latin America.