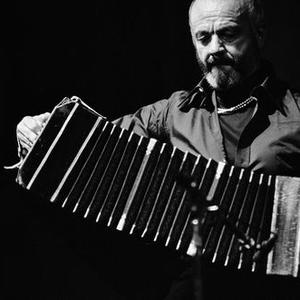 Astor Piazzolla (March 11, 1921 ? July 4, 1992) was an Argentine tango composer and bandone?n player. His oeuvre revolutionized the traditional tango into a new style termed nuevo tango, incorporating elements from jazz and classical music. An excellent bandoneonist, he regularly performed his own compositions with different ensembles. He is known in his native land as "El Gran Astor" ("The Great Astor").

Born in Argentina in 1921 to immigrant Italian parents, Piazzolla spent most of his childhood with his family in New York City. While there, he acquired fluency in four languages: Spanish, English, French, and Italian. He also started playing the bandoneon, quickly rising to the status of child prodigy. While still quite young, he met Carlos Gardel, another great figure of Argentine tango. He returned to Argentina in 1937, where strictly traditional tango still reigned, and played in night clubs with a series of groups. The pianist Arthur Rubinstein (then living in Buenos Aires) advised him to study with the Argentine composer Alberto Ginastera. Delving into scores of Stravinsky, Bart&oacute;k, Ravel, and others, he gave up tango temporarily and worked as a modernist classical composer.

At Ginastera's urging, in 1953 Piazzolla entered his "Buenos Aires" Symphony in a composition contest, and won a grant from the French government to study in Paris with the French composer and conductor Nadia Boulanger. The insightful Boulanger turned his life around in a day, as Piazzolla tells beautifully in his own words:

"When I met her, I showed her my kilos of symphonies and sonatas. She started to read them and suddenly came out with a horrible sentence: ?It's very well written.' And stopped, with a big period, round like a soccer ball. After a long while, she said: ?Here you are like Stravinsky, like Bart?k, like Ravel, but you know what happens? I can't find Piazzolla in this.? And she began to investigate my private life: what I did, what I did and did not play, if I was single, married, or living with someone, she was like an FBI agent! And I was very ashamed to tell her that I was a tango musician. Finally I said, ?I play in a ?night club.'? I didn't want to say ?cabaret.? And she answered, ?Night club, mais oui, but that is a cabaret, isn't it?? ?Yes,? I answered, and thought, ?I'll hit this woman in the head with a radio....? It wasn't easy to lie to her.
She kept asking: ?You say that you are not pianist. What instrument do you play, then?? And I didn't want to tell her that I was a bandoneon player, because I thought, ?Then she will throw me from the fourth floor.? Finally, I confessed and she asked me to play some bars of a tango of my own. She suddenly opened her eyes, took my hand and told me: ?You idiot, that's Piazzolla!? And I took all the music I composed, ten years of my life, and sent it to hell in two seconds."

Piazzolla returned to Argentina in 1955, formed the Octeto Buenos Aires to play tangos, and never looked back.

Upon introducing his new approach to the tango (nuevo tango), he became a controversial figure among Argentines both musically and politically. The Argentine saying "in Argentina everything may change ? except the tango" suggests some of the resistance he found in his native land. However, his music gained acceptance in Europe and North America, and his reworking of the tango was embraced by some liberal segments of Argentine society, who were pushing for political changes in parallel to his musical revolution.

During the period of Argentine military dictatorship from 1976 to 1983, Piazzolla lived in Italy, but returned many times to Argentina, recorded there, and on at least one occasion had lunch with the dictator Jorge Rafael Videla. However, his relationship with the dictator might have been less than friendly, as recounted in Astor Piazzolla, A manera de Memorias (a comprehensive collection of interviews, constituting a memoir):

In 1990 he suffered a thrombosis in Paris and he passed away two years later in Buenos Aires.

Piazzolla's nuevo tango was distinct from the traditional tango in its incorporation of elements of jazz, its use of extended harmonies and dissonance, its use of counterpoint, and its ventures into extended compositional forms. Piazzolla also introduced new instruments that were not used in the traditional tango, including the flute, saxophone, electric guitar, electronic instruments, and a full jazz/rock drum kit.

Piazzolla played with numerous ensembles beginning with the 1946 Orchestra, the 1955 "Octeto Buenos Aires", the 1960 "First Quintet", the 1971 "Noneto", the 1978 "Second Quintet" and the 1989 "Sextet". As well as providing original compositions and arrangements, he was the director and Bandoneon player in all of them. He also recorded an album with the famous cellist Yo-Yo Ma and another one with jazz sax player Gerry Mulligan. His numerous compositions include orchestral work such as the "Concierto para Bandone?n, Orquesta, Cuerdas y Percusi?n", "Doble-Concierto para Bandone?n y Guitarra", "Tres Tangos Sinf?nicos" and "Concierto de N?car para 9 Tanguistas y Orquesta", as well as song-form compositions that still today are well known by the general public in his country, like "Balada para un loco" (Ballad for a madman) and "Adi?s Nonino" (dedicated to his grandfather) which he recorded many times with different musicians and ensembles. Biographers estimate that Piazzolla wrote around 3,000 pieces and recorded around 500.

The Rough Guide To Astor Piazzolla