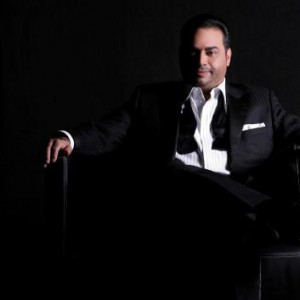 Gilberto Santa Rosa was born on 21 August 1962, in Puerto Rico and today is known as "El Caballero de la Salsa" (the gentleman of salsa). In 1976 he started with a group of amateurs in Puerto Rico, and his first recording was with the Mario Ortiz Orchestra. He then moved on to Orquesta La Grande, and during the two years Gilberto was with them, he met Mr. Elias Lop?s who later helped mold and polish the promising young singer, releasing three recordings.

In 1976 he started with a group of amateurs in Puerto Rico, and his first recording was with the Mario Ortiz Orchestra. He then moved on to Orquesta La Grande, and during the two years Gilberto was with them, he met Mr. Elias Lop?s who later helped mold and polish the promising young singer, releasing three recordings.

In 1980, he got an important opportunity recording "Homenaje a Eddie Palmieri" with the Puerto Rico All Stars. He then went on to record with Tommy Olivencia. From 1981 through 1986 he was with the Willie Rosario Orchestra where he recorded six albums.

Santa Rosa then signed with Ralph Cartagena's Combo Records. In 1986, he debuted on Good Vibrations fronting his own salsa orquesta. After releasing three more albums on Combo, including "De Amor y Salsa", he switched to CBS Records and issued the chart-topping salsa romantica set Punto De Vista in 1990, which went platinum and spawned the smash hits "Vivir Sin Ella" and "Perdoname". Santa Rosa's 1991 CBS/Sony follow-up, Perspectiva, was another monster hit.

Since the mid-80s, the mainstream salsa recording industry in Puerto Rico and the USA has been largely preoccupied with developing and marketing the images of "good looking" young male vocalists, rather than producing solid, stimulating music performed by swinging soneros (improvising salsa singers). Santa Rosa, however, who was one of the first of this new crop of solo singers, is regarded as being amongst the small number who deserve to be called a sonero.

In 1990, Santa Rosa was in the illustrious company of Andy Monta?ez and Pedro Brull (from Mulenze ), as one of the contemporary soneros assembled by bandleader Don Perignon for his all-star La Puertorrique?a project. In 1990, he won the Billboard Lo Nuestro award for Best Male Singer. He has also performed at New York's prestigious annual salsa festival. But 1990 was an important year in other respects. Santa Rosa made acting debut in the play "La pareja dispareja", where he was joined by Rafo Mu?iz and Luis Vigoreaux.

He visited Japan in 1995 as Puerto Rico's musical ambassador and sang one of his songs, "De cara al viento" in Japanese in his effort to bridge the cultural barriers. Since then Santa Rosa's fame reached across borders and continents; commanding recognition as salsa artist in most demand. In 1996 he released yet another smash album Esencia which included hit songs such as No Quiero Nada Regala'o.

Santa Rosa's recent work has not been limited to soloist recordings. He joined other artists in the First President's Festival in the Dominican Republic; Andy Monta?ez in New York's Lincoln Center, in 1997; and Olga Ta?on in the Universal Studios Amphitheater in Holloywood, in 1997.

In 1999, he released Expresi?n, which reinforced his international fame. The album included the hit song "Que alguien me diga", written by Omar Alfanno, which was at the top of Billboard?s latin chart for various weeks. The album also included the song Fulana, unlike his well known salsa, demonstrating his wide range of interests and ability. The album was selected as one of the 20 best recordings of the year by the National Foundation Popular Culture of Puerto Rico.