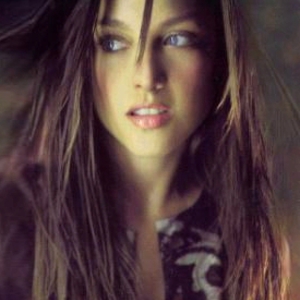 Fey (born Mar?a Fernanda Bl?zquez Gil) is a Latin Grammy-nominated Mexican pop star, born July 21, 1973 in Mexico City. Fey's nickname comes from one of her relatives -- a small child -- who was unable to pronounce the name "Fernanda" correctly, and instead pronounced it "Fey." Fey released her first album, the self-titled Fey, on March 21, 1995. The album was wildly successful, putting her on top of the charts with a string of hits beginning with the #1 single "Media Naranja".

Fey released her first album, the self-titled Fey, on March 21, 1995. The album was wildly successful, putting her on top of the charts with a string of hits beginning with the #1 single "Media Naranja". The subsequent singles "Me Enamoro De Ti" and "Gatos En El Balc?n," also charted at #1, and "La Noche se Mueve" (#2), "Bailando Bajo La Lluvia" (#16) and "Fiebre del S?bado" (#3) also struck a chord with listeners and propelled Fey to almost instant stardom.

Her second album, titled Tierna La Noche, was released on November 5, 1996, and is Fey's most successful album to date, selling over 3.5 million copies and spawning hits that kept her in the #1 position for a collective 23 weeks (#1 singles were "Az?car Amargo", "Mu?velo", "Te Pertenezco" and "Subid?n"). On tour for the album, Fey sold out Mexico's 10,000-seat El Auditorio Nacional four nights in a row.

On November 3, 1998, after an 8-month break from supporting Tierna La Noche, Fey released the more musically mature album El Color De Los Sue&ntilde;os. The album put 6 singles on the charts, including #1's "Ni T? ni Nadie", "D?selo Con Flores" and "Canela". With this album she came back to Mexico City?s National Auditorium, breaking the record after 10 consecutive sold out shows in a row, record that earned her a recognition as the only female artist to reach this.

In 2002, Fey came out of retirement with the release of Vertigo, an album recorded in English and then re-recorded in Spanish (it was also sold as a double album). The album sold well, upwards of 1 million copies, and had one #1 hit, "Se Lo Que Vendra/The Other Side". This album is darker and moodier than the music Fey had released previously, qualities which reportedly reflected Fey's tumultuous personal life. Although this album was the least successful album of her career at the time, it is widely cited as the favorite album by fans because it was almost completely written by Fey herself.

In 2005, Fey announced that she would be releasing La Fuerza Del Destino, an album in tribute to the Spanish band Mecano. The album generated three singles -- "La Fuerza del Destino", "Barco A Venus", and "Me Cuesta Tanto Olvidarte". This album was also nominated for a Latin Grammy for "Best Pop Female Vocal Album", a first in Fey's career.

On August 1, 2006, Fey released Faltan Lunas, returning to the dance pop music roots of her earlier albums, although with a decided maturity. The first single, "Y Aqu? Estoy", is a cover of "One Suitcase", originally made popular by Swedish singer Annis. That single charted at #10, and the follow-up single, "Como Un Angel", was slated for release and then cancelled due to turmoil between Fey and her label, EMI. There is speculation that the single was released and that EMI did nothing to promote it, which could explain Fey's departure from the label not long after the single's planned release date. Fey's website also disappeared from the web around this time.

In June of 2008, Fey resurfaced, talking through her manager about an upcoming double album which will be recorded half in English and half in Spanish -- much like Vertigo.

In September of 2008, Fey's official website came back online with a handwritten letter from Fey. She announced that the new album would be released by April of 2009 and put up a brand new Pre Release song, "Monsters."

In February 2009, Lentamente, her new single from Dulce Tentacion, Fey?s latest album due to be released in April 2009, hit radio stations in all Mexico. The single has reached the top charts, and is widely listened to in Clubs.

Dulce Tentacion hit stores in all Mexico on April 28th, and has been claimed by many music experts in Mexico as "The Most Anticipated Album of 2009", "Impresive and Powerful Sound" , "Simply Spectacular!", and many more. The album is due to hit iTunes with an Exclusive version of the album on May 5, 2009.

On June 22nd 2012 Fey recorded her new album/dvd called: Fey Primera Fila which is a private session with the fans and some acoustics track versions of her career and 3 new Tracks including the heading single Fr?o. This format is more likely like an MTV Unplugged recording. It's expected to be released in Octuber of the same year.