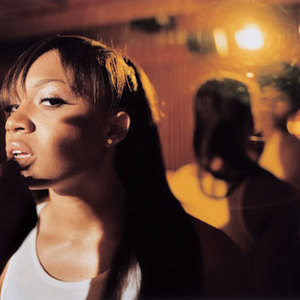 Itunes, Love It, R And B, Rnb, Underrated, Urban

Elizabeth T. Wyce Bingham a.k.a. Yummy is an American R&B singer, songwriter and music executive. She is a former member of Tha Rayne. She was born on January 7th, 1986 to Dinky Bingham and Patrice Wyce. The godchild of both R&B legends Chaka Khan and New Jack King Aaron Hall, Yummy Bingham has been surrounded by music since her birth. Her father, Dinky Bingham is a noted musician, singer and producer who is responsible for hits from Changing Faces, New Edition, Kylie Minogue and Jaheim.

She was born on January 7th, 1986 to Dinky Bingham and Patrice Wyce. The godchild of both R&B legends Chaka Khan and New Jack King Aaron Hall, Yummy Bingham has been surrounded by music since her birth. Her father, Dinky Bingham is a noted musician, singer and producer who is responsible for hits from Changing Faces, New Edition, Kylie Minogue and Jaheim.

Her father being always on the road, Yummy grew up with her mother until she was taken away due to allegation of abuses. After a tumultuous few years as a wild child in South Jamaica, Queens (New-York) where she was raised by her grand-parents, Yummy calmed down and began focusing on singing at 12, which led to a stint in Arista recording girl group Tha Rayne after meeting up with veteran producer KayGee in 2000, through a demo she did with her father. Tha' Rayne would eventually split up when Arista folded in 2004, but Bingham did get a taste of the spotlight when she sang on Jaheim's hit single "Fabulous" as well as with Tha Rayne's club bangers "Rock Wit Me", "No Love" and the radio friendly "Didn't You Know", produced by Rich Harrison.

Being part of a group didn't stop Yummy focusing on her solo career, and, in the year 2001, at 15, she appeared on the Osmosis Jones soundtrack, performing on the lead theme ("Turn It Out"), along with hip-hop legends De La Soul. Shortly thereafter, she contributed vocals to De La Soul's hit "Baby Phat" and then completed some more songs with the group until today, establishing herself as De La Soul's appointed vocalist.

In 2004, she re-connected with platinum beat maestro Rockwilder who took Yummy on as a signed artist on his label (Muzic Park Records) but also as a business partner, offering her to become a part of owning the company and to serve there as co-CEO. Yummy Bingham also owns her own entertainment and production company : Sweat Break Entertainment/Sweat Break Muzic, making her one of the music industry's youngest female executives.

Yummy Bingham was signed in 2005 to Cash Money/Universal for a very brief experience. Because Cash Money's checks bounced, Yummy left the label and was signed up by Universal's Executive Vice President Sylvia Rhone who really wanted Bingham to help revive her own label : Motown Records (a Universal company). Her street single Come Get It (featuring Jadakiss) (used in a Pontiac commercial) had been embraced by the mainstream audiences and turned into a moderate hit.

The following to "Come Get It" was the originally intended for Beyonc? song Is It Good To You, produced by Rockwilder. The single was ready to hit the radios in January, but even after the help of Fabolous and Red Caf? on the remix (March), it failed to seduce radio DJs who didn't picked out the tune. Motown decided to change the single to One More Chance which impacted US radios on April 24th crashing at #2 Urban Most Added but less than two weeks later, Yummy encountered label problems that caused her to leave Muzic Park Records and sign with new management. The promotion of the single was halted although Motown kept Yummy among its roster and sent her back in the studio.

In July 2006, Yummy had been picked up by Island Record Group (Motown's parent company in the UK) to be one of the new revelations of the 2006 Notting Hill Carnival in late August. During the Carnival, Yummy's "Come Get It" emerged on different music channels. The single is expected to be released in the UK in September.

Her debut solo album The First Seed is expected for an October 9th release.

Is it Good to You