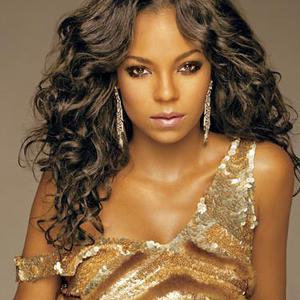 Ashanti is most famous for her eponymous Grammy Award-winning debut album Ashanti which featured the hit song Foolish. The album set a Soundscan record as the most albums sold by any first-time female artist in the chart's history, outselling debuts by Alicia Keys and Lauryn Hill. Later that year, she was acclaimed as the "Princess of Hip-Hop & R&B" by the media and capped off her successful debut by winning eight Billboard awards and two American Music Awards.

Ashanti cites Mary J. Blige, Ella Fitzgerald, Yolanda Adams, The Clark Sisters, and Blue Magic as her musical influences. Praised as a gifted songwriter by her peers and critics alike, Ashanti has written/co-written the bulk of all her music. She is currently working on her own record label entitled Written Entertainment.

It was when she was noticed by Murder Inc. mastermind Irv Gotti that Ashanti began to blossom. Gotti noted her dancing and acting abilities in addition to her vocal skills. In 2001, Ashanti was first featured as a background vocalist on rapper Big Pun's song How We Roll. In the same year, Ashanti was featured on fellow labelmate Caddillac Tah's singles Pov City Anthem and just like a thug. She also appeared on the 2001 The Fast and the Furious soundtrack as a featured artist on Vita's 2001 hip hop remake of Madonna's Justify My Love and on the solo track When A Man Does Wrong. She appeared as a background vocalist on I'm Real (Murder Remix), a collaboration by labelmate Ja Rule and Jennifer Lopez (she also appeared in the music video for Ain't It Funny (Murder Remix), the 2nd duet between Lopez & Rule), and was featured on Fat Joe's What's Luv? and Ja Rule's Always On Time. What's Luv? and Always On Time were released simultaneously and became two of the biggest hit songs of 2002. Ashanti became the first female to occupy the top two positions on the U.S. Billboard Hot 100 chart when Always On Time and What's Luv? were number-one and number-two respectively.

Following the success of her collaborations with Ja Rule and Fat Joe, Ashanti released her debut single, Foolish, which contained a sample of the 1983 song Stay With Me by DeBarge (also utilized by Notorious B.I.G. in his 1995 hit One More Chance). She became the second artist (after the The Beatles) to have their first three chart entries in the top ten of the Hot 100 simultaneously. Ashanti's self-titled debut album, Ashanti, was released on Irv Gotti's Murder Inc. record label in April 2002. It debuted at number-one on the U.S. Billboard 200 albums chart, selling over 503,000 copies in its first week (the most successful first week sales for a debut R&B female artist up through that point--record later broken by Mary J. Blige's The Breakthrough). The album has been certified 3x platinum in the U.S and platinum (300,000 copies) in the UK. The album has sold over 6.5 million copies worldwide. Ashanti penned all 12 songs on the album, most written on-the-spot in the studio.

Ashanti's follow-up singles, Happy and Baby, were not as successful as her debut single but did peak in the top ten and top twenty in the U.S. respectively. During the summer of 2002, Ashanti appeared on Ja Rule's Down 4 U with labelmates, female rappers Vita and Charli Baltimore. The song appeared on a Murder Inc. compilation titled Irv Gotti Presents The Inc. Ashanti's debut album earned her many awards including eight Billboard Music Awards, two American Music Awards, a Lady of Soul Award for "Aretha Franklin Entertainer of the Year," and a Grammy Award.

In July 2003, Ashanti released her second album, Chapter II, which debuted at number one on the Billboard 200 with first week sales of 326,000 copies in the U.S.. The album went Platinum, selling 1.5 million copies in U.S. The album's success was somewhat eclipsed, however, by all the negative drama surrounding the Murder Inc. camp at the time (i.e., the FBI investigation and the G-Unit feuding). Chapter II's first single, Rock Wit U (Awww Baby), became a hit, peaking at number two on the Billboard Hot 100. Its video, which showed Ashanti in a bikini frolicking on a beach and riding an elephant named Bubbles, was nominated for two 2003 MTV Video Music Awards. A remix of the song contains interpolations of Michael Jackson's Rock With You. The second single, Rain On Me, reached the number-seven spot on the Hot 100 and number two on the Hot 100 R&B Songs chart. Chapter II was nominated for a 2004 Grammy Award for Best Contemporary R&B Album, and Rock Wit U (Awww Baby) and Rain On Me were nominated in the categories of Best R&B Song and Best Female R&B Vocal Performance, respectively. At the end of 2003 in November, Ashanti performed at The American Music Awards and was nominated in two categories.

In November 2003, Ashanti's Christmas album, Ashanti's Christmas was released. The album containing 10 Christmas songs, six classic covers and four she wrote herself. To coincide with the release Ashanti premiered a Christmas Medley video for the album. While on BET's 106 & Park, Ashanti said the concept of the Christmas Album came from a guest spot she did on Steve Harvey's radio show. While playing a game with Stevie Wonder, he began playing Christmas medleys on the piano and Ashanti began singing them, giving her label head the idea to push for a Christmas Album. Ashanti went into the studio to record the album during the summer of 2003. According to soundscan, the album sold just around 100,000 units in the U.S.

Before Concrete Rose was released, Ashanti did some major promotion for her single Only U, when she premiered it at the 2004 Vibe Music Awards. In 2004, Ashanti was invited back to perform at VH1's Divas 2004. She appeared on stage with Patti LaBelle, Gladys Knight, Jessica Simpson, and others. She performed Diana Ross' single "I'm Coming Out", and she performed a soul-influenced rendition of Chaka Khan's funk driven "Ain't Nobody. Later that year Ashanti collaborated with male R&B newcomer and labelmate Lloyd on the song Southside, which was released as his debut single and was a moderate hit. Wonderful?with Ja Rule and R. Kelly?peaked at number five in the U.S. and at number one in the UK, and [track artist=Shyne]Jimmy Choo with rapper Shyne reached number fifty-five on the Billboard Hot R&B/Hip-Hop Singles & Tracks chart. Alongside artist such as Wyclef Jean, Mary J. Blige, Eve, Brandy, Fabolous, Jadakiss, Missy Elliott, and many others, Ashanti participated in a cover of "Wake Up Everybody" in support of ACT, the left-leaning political action committee.

In December 2004, Ashanti released her third studio album, Concrete Rose, the title of which took on Tupac Shakur's pseudonym "The Rose That Grew from Concrete". The album debuted at number seven in the U.S with first week sales of 254,000 copies, and eventually became her third platinum certified album; according to Nielsen SoundScan, it has sold 871,000 copies. The first single, the gold-certified Only U, reached number thirteen on the Billboard Hot 100 and became her biggest hit in the United Kingdom, peaking at number two. A second single, the ballad Don't Let Them, garnered little chart success after Def Jam refused to fund a music video due to Irv Gotti's legal troubles during his money laundering trial. Ashanti used her own money to deliver the second video to her fans, with Gotti acting as director. The single was released only in the U.S., where it failed to chart, and the UK, where it reached the lower end of the top forty. In 2005, Ashanti graced the stage at the MTV Japan Music Awards, where she performed her hit single, Only U. She also won a Style award during the show. She performed alongside huge acts like Mariah Carey and Korean star Rain.

In December 2005, Ashanti released a remix album of Concrete Rose titled Collectables By Ashanti. It features six remixes of previously released tracks and four newly recorded songs, including the single Still On It, which features rappers Paul Wall and Method Man. The album was an opportunity for her to fulfill her contract with Def Jam (and have the option of working with another label), and did not fare well on the charts.

Her fourth studio album, The Declaration, was released on June 3, 2008. Ashanti ventured out and acquired producers and collaborators primarily outside The Inc. for the first time. She said the album was a representation of the freedom she felt she had at that time in her career. "I'm steering my own ship and taking the lead on everything. You can definitely hear the growth; I'm working with producers I've never worked with before". Irv Gotti was quoted as saying, "she's having her little Janet Jackson Control moment. Every artist has their moment when they feel they need to take over their own music and this is hers".

The album debuted at number six on the Billboard 200 with sales of 86,000 copies, Ashanti's lowest first-week sales for a studio album. As of September 2008, The Declaration had sold 230,000 copies in the U.S., according to Nielsen SoundScan. Two singles released during 2007 in advance of the album's release?Switch featuring Nelly, and Hey Baby (After The Club) featuring Mario Winans?did not chart on the Billboard Hot 100. Hey Baby (After The Club) reached number eighty-seven on the Hot R&B/Hip-Hop Songs chart, and the third single, the L. T. Hutton-produced The Way That I Love You, reached number two on the Hot R&B/Hip-Hop Songs chart and peaked at number thirty-seven on the Billboard Hot 100 chart. The final single, the Jermaine Dupri-produced Good Good, became a minor urban hit, peaking at number thirty on the Hot R&B/Hip-Hop Songs. Also featured on The Declaration is the Nelly collaboration Body On Me, which is the third single from his 2008 album Brass Knuckles.

In May 2009, Irv Gotti announced that he was officially releasing Ashanti from The Inc. Records, stating that "The relationship has run its course. The chemistry of what's needed ? we're in two totally different places. You're talking to somebody that took her and shaped and molded her and put her out there for the world, and it blew up. We [hold the record] for the [fastest] selling debut by a female R&B artist ? 503 [thousand]. We did it! My views and philosophies and her views and philosophies are not meeting up." Gotti also admitted that he and Ashanti have not spoken to each other in a long time. A rep for Ashanti did not respond.

Ashanti confirmed via twitter that she is currently in the studio working on her fifth album, that is being released off her own record label Written Entertainment. Ashanti is rumored to be working with a slew of producers and artist, thus far this is all that has been verified... LT Hutton, Dr. Dre, Deshaun, Game, Theron Feemster bka Neff-U, The-Dream, Cool & Dre, Warryn Campbell, Carvin & Ivan, Common, Darkchild and Tank who co-wrote and co-produced with her the song Paradise. Ashanti's new single & album is set to be released sometime in 2011.

Never Should Have (CDS)