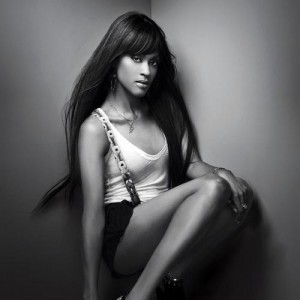 Shontelle Layne (born October 4, 1985), better known by her first name Shontelle, is an R&B singer-songwriter from Saint James, Barbados. She released her debut album Shontelligence in November 2008. Her second album, No Gravity, was released in September 2010. Shontelle was born in Saint James, Barbados, to Raymond and Beverley Layne, the oldest of three sisters. Shontelle has stated that she was highly athletic when she was young, participating in track & field while excelling in school. Shontelle's aunt, Kim Derrick, a Caribbean singer, encouraged her to pursue singing.

Shontelle was born in Saint James, Barbados, to Raymond and Beverley Layne, the oldest of three sisters. Shontelle has stated that she was highly athletic when she was young, participating in track & field while excelling in school. Shontelle's aunt, Kim Derrick, a Caribbean singer, encouraged her to pursue singing. While in high school, Shontelle participated in a group called Cadets in which she was a drill sergeant over Rihanna, which sprouted a friendship.

Shontelle began work on her debut studio album in early 2008, and completed the album in six months. The album's title was given to her by the album's engineer who used the word "shontelligence" as a joke after Shontelle and her producers were playing a game that involved making up words from her name. "T-Shirt", Shontelle's debut single, was released in July 2008 and reached number thirty-six on the Billboard Hot 100, becoming a moderate hit. However, it was a hit in the United Kingdom, reaching the Top 10 there.

The second single from the album, "Stuck with Each Other", featuring Akon, was released in February 2009 in the US and May 2009 in the UK. The single failed to chart in the US, but reached number twenty-three in the UK. Shontelle toured as a supporting act for the UK leg of the New Kids on the Block World Tour in January 2009. Shontelle was also Beyonc? Knowles' opening act for her I Am... Tour from May to June 2009 during the UK leg.

Shontelle was also the host of My Prom Style! and Universal Motown's 2009 Ultimate Prom fashion reality series. She performed at a high school prom in New York City in June 2009, but first she led three students in a competition to design the dress that singer Kat DeLuna, the headliner, wore at the Ultimate Prom concert.

Shontelle's sophomore album, No Gravity, was released in the US on September 21, 2010. Shontelle stated that the album would be experimental and that she wanted to change her original sound for the record. While the title 'No Gravity' symbolises a mantra, Shontelle states she has adapted to her life and to her career, to motivate herself to keep climbing higher and to have nothing hold her down or hold her back. Shontelle collaborated with Bruno Mars, Tony Kanal and Darkchild among others for the record.

The 3rd single will be Say Hello To Goodbye according to the tweet she wrote December 19th.

Stuck With Each Other (MCD)