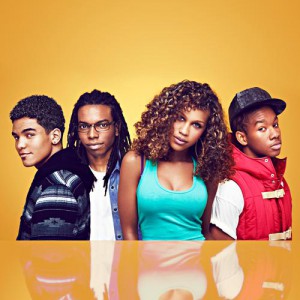 Cover Drive are a four-piece band from Barbados consisting of the members: lead singer and lone female, Amanda Reifer (21), drummer "T-Ray" Armstrong (18), guitarist Barry "Bar-Man" Hill (22) and bassist Jamar Harding (18) all from Barbados. According to the Sparks Songfacts, it was T-Ray's father who named the band. He's a big cricket fan and a cover drive is a cricket shot, which they liked how it sounded. Also cricket is Barbados' national sport.

After the band were signed by Polydor Records, the band started writing and recording material for their album. Whilst in the studio, they met American producer J. R. Rotem who produced their debut single, "Lick Ya Down" which was released on 28 August 2011. After receiving heavy airplay on both the Radio and Music channels in the United Kingdom, the song peaked #9 on the UK Singles Chart and #3 on the UK R&B Singles Chart.

They later released their second single "Twilight" on 22 January 2012, which was their first single to chart in Ireland debuting at #40. The song peaked at #1 on the UK iTunes chart within hours of its release. The song was produced by Quiz & Larossi. On 29 January 2012, the song entered at #1 on the charts in the United Kingdom for the week ending 4 February 2012. The band has confirmed that their debut album will be called "Bajan Style" and they described it as "a beach party in Barbados" and will be released on 30 April 2012.The Third Single from their album will be called 'Sparks' and is to be released on 22 April. The first play of the single 'Sparks' was on The Hits Radio.

Their third single Sparks premiered on The Hits Radio and was officially released on April 23, 2012.