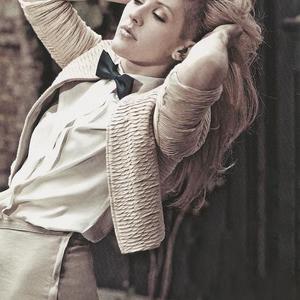 Ellie Goulding (born Elena Jane Goulding on 30 December 1986) is an English singer-songwriter. Born in Hereford, she grew up in Kington, Herefordshire and currently lives in London, England. After studying drama at the University of Kent for a couple of years, Goulding moved to West London for the purpose of developing her songs and music career. Touring since 2008 she released her debut single "Under the Sheets" on 15 November 2009.

After studying drama at the University of Kent for a couple of years, Goulding moved to West London for the purpose of developing her songs and music career. Touring since 2008 she released her debut single "Under the Sheets" on 15 November 2009. The track was produced by Starsmith, with whom she has been working since the beginning of her career. On 8 January 2010, Goulding topped the BBC Sound of 2010 music list. Previous winners include the likes of Little Boots, Corinne Bailey Rae and Mika. On 16 February 2010, she won the Critics' Choice award at the BRIT Awards, which has previously been given to acts such as Adele and Florence + the Machine.

Ellie Goulding's debut album Lights was released on 1 March 2010 and debuted at number one on the UK Albums Chart. It was re-released 29 November 2010 as Bright Lights with six new tracks. It produced two additional singles: "Your Song," a cover of Elton John's song (which went on to become her biggest single to date in the UK, reaching number two) and the title track "Lights (Single Version)." Following this re-release, the album saw a surge in sales in both the UK and Ireland. On March 8, 2011, the album was released in the United States with alternate cover art and featuring three songs that were previously not on the original version but were included on Bright Lights, those songs being "Lights," "Animal," and "Your Song."

Goulding's second album Halcyon was released on 8 October 2012. The first single from the album, "Anything Could Happen," was released digitally in the UK on 30 September 2012.

Goulding co-wrote three songs for Diana Vickers debut album Songs From the Tainted Cherry Tree, titled "Remake Me & You", "Notice" and "Jumping Into Rivers" (all three co-written with Vickers and Guy Sigsworth). She also co-wrote a track with George Astasio, Gabriella Cilmi, Jason Pebworth and Jon Shave for Cilmi's second album Ten, titled "Love Me Cos You Want To".

Worry About Me (CDS)

Close To Me (CDS)