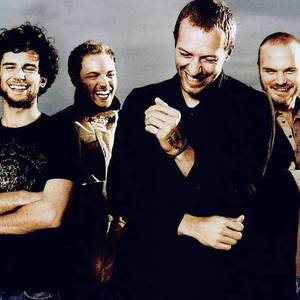 Coldplay is a British alternative rock band, formed in London, United Kingdom in 1997. The band comprises vocalist and pianist Chris Martin, lead guitarist Jonny Buckland, bassist Guy Berryman, and drummer Will Champion. Having released four successful albums, (all of which debuted at #1 on the UK album chart) Coldplay have also achieved great success with their singles, such as Yellow, Speed of Sound, the Grammy-winning Clocks and the US and UK #1 single Viva la Vida. Frontman Chris Martin credits 1980s Norwegian pop band a-ha for inspiring him to form his own band.

Having released four successful albums, (all of which debuted at #1 on the UK album chart) Coldplay have also achieved great success with their singles, such as Yellow, Speed of Sound, the Grammy-winning Clocks and the US and UK #1 single Viva la Vida.

Coldplay's early material was often compared to that of Jeff Buckley and Radiohead, while also drawing comparisons to U2 and Travis. Since the release of the band's debut album, Parachutes (2000), Coldplay has also drawn influence from other sources, including Echo And The Bunnymen and George Harrison on A Rush of Blood to the Head (2002) and Johnny Cash and Kraftwerk for X&Y (2005).

Coldplay are one of very few current British music acts to achieve major success in North America. Despite their large worldwide popularity, the band has remained protective of how their music is used in the media, refusing its use for product endorsements. In the past, Coldplay had turned down multi-million dollar contracts from Gatorade, Diet Coke, and Gap, who wanted to use the songs "Yellow", Trouble, and Don't Panic respectively. According to Martin, "We wouldn't be able to live with ourselves if we sold the songs' meanings like that." On the other hand, "Yellow" has been used to back TV trailers for "The Simpsons" and "Viva la Vida" from their latest album features on the current iTunes TV advert.

Since 2002, Coldplay have been active supporters of various social and political causes. They have been visible advocates of Oxfam's Make Trade Fair campaign and Amnesty International. The group has also performed at various charity projects such as Band Aid 20, Live 8, and the Teenage Cancer Trust.

At the Brit Awards 2006, Chris Martin stated that fans would not see them for a long time, suggesting it would be some time before another studio album was released, if at all. However, the previous day on Valentine's Day 2006, during UK Radio DJ Chris Moyles' Breakfast show, Martin had said, "The next album is very good, and I know because it is already written", and rumours were that the band would hire their own 'HQ' studio in the style of Kraftwerk's Kling Klang base to record it, so it would seem there was more to come from Coldplay yet.

Coldplay never intended to become England's favorite rock & roll sons when their signature rock melodies ruled the charts throughout 2000. The quartet yearned to mess around a bit, plucking their own acoustics for fun while attending the University College of London. All had been playing instruments since their early teens and had been influenced by the likes of Bob Dylan, The Stone Roses, Neil Young, and My Bloody Valentine.

They never imagined taking reign of the UK's ever-changing rock scene. Each member had come from a solid household of middle-class parents who encouraged music. Martin, the eldest of five siblings, began playing the piano as a young child. He started playing in bands around age 15 and sought solace in the words of Tom Waits. Buckland, on the other hand, was into the heavy guitar work of Eric Clapton and Jimi Hendrix and was playing guitar by age 11. Scotland native Berryman was into funk instead of indie rock, therefore leaving him to play bass. The multi-instrumentalist Champion had not planned to be a drummer until he joined Coldplay. He favoured playing guitar, bass, and the tin whistle, but caught on to playing percussion when the band became official.

When they burst onto the scene, Coldplay were heart-wrenching like Travis, passionate like Jeff Buckley, and as fresh as Oasis. They played their first gig at a festival for unsigned bands in Manchester, and the Safety EP was issued shortly thereafter. The Brothers & Sisters EP was issued by Fierce Panda and released a year later. (Both releases saw only 500 pressings.) Their sweet melodies and swooning lyrics landed Coldplay a UK deal with Parlophone in April 1999, and the five-track limited edition Blue Room EP followed that autumn. With nods from the media, the dream pop foursome was hailed as the next Travis, thanks to their simplistic acoustics and charming personas. Two more EPs, Shiver and Yellow, arrived in Spring 2000.

Their full-length debut, Parachutes, earned the band a Mercury Music Prize nomination in the UK. It saw a US release in November 2000, and a month later "Yellow" was chosen as the theme song for all promo spots for the American TV network ABC. The well-received hype surrounding Coldplay continued throughout 2001 as well; they were nominated for three Brit Awards and embarked on a sold-out ten-date tour of the US. Rumours of a split consumed most of the US tour. Martin frequently battled nasty colds and voice exhaustion, which led Coldplay to cancel a series of American dates and scrap a European tour. With all gossip aside, Coldplay resumed playing in Summer 2001 and earned additional success with second single "Trouble".

By the autumn, they had headed into the studio for a second album. Rumour had it that it might be Coldplay's last album, since the band members felt they might not capture such brilliance again. A Rush of Blood to the Head was released in August 2002. The CD/DVD package Live 2003 was issued a year later. Capturing the band's show at the Horden Pavilion in Sydney, Australia, it highlighted Coldplay's monumental success worldwide with A Rush of Blood to the Head. Martin specifically earned a higher notch on the celebrity scale by marrying actress Gwyneth Paltrow in December 2003. Paltrow gave birth to the couple's first daughter, Apple Blythe Alison Martin, the following April.

Fatherhood did not stop Martin from working, as Coldplay began recording material for a third album within weeks. Previously recorded material with longtime producer Ken Nelson was scrapped early on, while producer Danton Supple (Morrissey, The Cure) joined Coldplay to complete the recording of X&Y. "Speed of Sound" marked Coldplay's first single from their long-awaited third effort in Spring 2005; the album followed in June, topping the charts around the world, including America and Britain.

Coldplay's fourth album Viva la Vida or Death and All His Friends was released on June 12, 2008 in the United Kingdom, with the first single Violet Hill having been previously released as a free download through their official website for a week from April 29, 2008.

The latest album is currently being given lots of positive feedback for its originality in melodic acoustics and slightly less 'synth-dependent' riffs. It offers a great insight into how significantly the band's music has adapted and developed to themselves and the public.

Viva la Vida was produced by Brian Eno, mixed by Markus Dravs, and drew influence from the time the group spent in South America.

Barely a week before the album was released, a duo with Kylie Minogue which was intended to be used was scrapped with the comment that 'it was too sexy'. However, they plan to release it as a single or on a deluxe album expected at around Christmas 2008.

On Dec 1, 2008, Coldplay released "Lhuna" with Kylie Minogue at the launch of the (RED)WIRE? website to mark World AIDS Day 2008. This is the world premiere of the song.

Music Of The Spheres