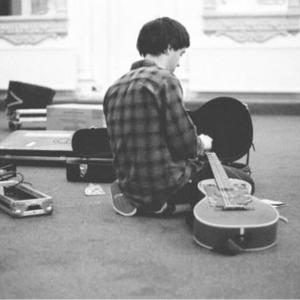 Villagers are an Irish band from Dublin fronted by Conor J. O'Brien. They have performed at several music festivals and toured with Tracy Chapman, Bell X1 and Tindersticks. They have one EP, titled Hollow Kind (2009). Their debut album Becoming a Jackal was released in 2010 and was shortlisted for that year's Mercury Prize. Conor O'Brien formed Villagers after the break-up of his previous band The Immediate. The very next day, O'Brien wrote the first song after waking up with a hangover.

They have performed at several music festivals and toured with Tracy Chapman, Bell X1 and Tindersticks. They have one EP, titled Hollow Kind (2009). Their debut album Becoming a Jackal was released in 2010 and was shortlisted for that year's Mercury Prize.

Conor O'Brien formed Villagers after the break-up of his previous band The Immediate. The very next day, O'Brien wrote the first song after waking up with a hangover. O'Brien's time as a guitarist in Cathy Davey's band was also critical to the development of his style as he had never before performed alongside anyone outside of The Immediate. Villagers gave their first live performance as a support act with The Chapters at a show in Whelan's in November 2008. At that point the band had previously only rehearsed together on two occasions. They had only seven songs, written by O'Brien and passed on to the rest of the band to learn.
Villagers performed on the seventh series of RT? Two's Other Voices television programme in 2009. The band's debut EP, titled Hollow Kind, was released in February 2009. It contained four tracks, all of which were written by O'Brien and performed by him too. The EP brought comparisons with Bright Eyes and Sparklehorse. Villagers then went on tour. They were a support act for Neil Young and toured across Europe with Tracy Chapman.
Villagers appeared at several festivals in 2009. They supported Bell X1 when they performed at Live at the Marquee in Cork on June 26, 2009. They performed at several music festivals in Ireland, including on the Sunday of Oxegen 2009, at Indie-pendence on August 2 and at Electric Picnic 2009, as well as at Latitude Festival in the UK. The Irish Times's Jim Carroll recommended their performance in the Body Soul Arena at Electric Picnic 2009 as "A must-see for those who dig ragged pop, eerie folk and heartfelt, emotional songs and sounds". They headlined Hard Working Class Heroes in 2009, with O'Brien attracting the ire of the audience when he requested some quiet during the performance. They gave a live performance at The Music Show in Dublin's RDS in October 2009.
The debut single of Villagers was "On a Sunlit Stage" and was released in October 2009.
On January 15, 2010, Villagers represented Ireland at the Eurosonic Festival in Groningen, the Netherlands. They were involved in efforts to raise funds in the aftermath of the 2010 Haiti earthquake. They embarked on a tour with Tindersticks in March 2010 and released the single "Becoming a Jackal" on April 17, 2010. A debut album Becoming a Jackal was released in Ireland on 14 May 2010, with a UK release in May and a US release due on 8 June 2010. The album immediately went to number one on both the Irish Albums Chart and the Irish Indie Albums Chart. It proceeded to continuously top the indie chart.

Said by Conor J. O'Brien himself:
- ?Ultimately, I've learned that a song is not an isolated thing. You have to wash the dishes before you write a song. It should never be taken too seriously. It must be treated with joy and humour, regardless of the subject matter,? muses Conor, as he strokes his hairless chin.
- ?The aim is to feel the songs out. If I don't surprise myself, then it is a worthless endeavour. Indeed, I would apply this attitude to all aspects of this project. The songs are quite decisive, but I have no idea what I am doing, or where I am going.? Again, he strokes his chin, this time with a look of resigned confusion. ?Once the songs took shape, I asked some friends of mine to help me play them to people. When they kindly agreed, I decided that we would present ourselves as ?Villagers' ? I don't really know why. I think I like the name because it doesn't offend the songs.? With this, he puts his clothes back on and bids me farewell. On returning to my office, I slip on a banana peel and subsequently die.

The Art Of Pretending To Swim

Where Have You Been All My Life? (Live At Rak)