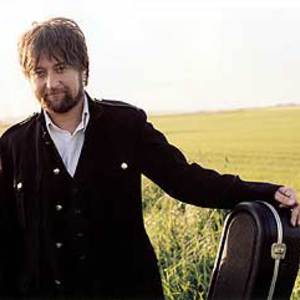 King Creosote is the stagename of Scottish singer-songwriter Kenny Anderson (from Fife, Scotland). Anderson began recording albums under the name King Creosote in 1995. Since then, Anderson has released over forty albums, beginning with "Queen Of Brush County" in 1998. During this time, Anderson has performed with Skuobhie Dubh Orchestra and Khartoum Heroes. He is also a member of Scottish-Canadian 'supergroup', The Burns Unit.

A popular misconception is that this is the name of the band featuring him and not just his stage name. However, at live shows, he will usually introduce his band members by their similar pseudonyms - some fellow Fence Collective artistes such as "The Pictish Trail" (aka Johnny Lynch), On The Fly and Uncle Beesly, to name but the usual line-up.

The Bound Of The Red Deer (With Michael Johnston)

From Scotland With Love (Extended Edition)

From Scotland With Love