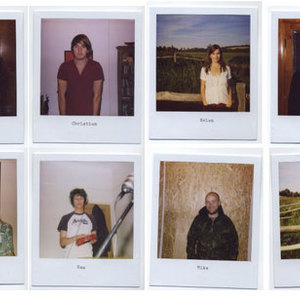 The Leisure Society is a British folk-pop band formed in London, UK by Nick Hemming, formerly of early 1990s indie band she talks to angels ?Please don't forget about the past/The hungry years we hid beneath the sand,? says The Hungry Years, one of many standout tracks on Into The Murky Water, the new album from the band. It's fuelled by a pointed, bittersweet kind of melancholy, the sort of feeling understood only by people who, after years of standing on the sidelines, have started to see their dreams come true - people like Nick Hemming and Christian Hardy...

?Please don't forget about the past/The hungry years we hid beneath the sand,? says The Hungry Years, one of many standout tracks on Into The Murky Water, the new album from the band. It's fuelled by a pointed, bittersweet kind of melancholy, the sort of feeling understood only by people who, after years of standing on the sidelines, have started to see their dreams come true - people like Nick Hemming and Christian Hardy, the creative duo at the heart of the band.

From the moment the title track creeps in with bouncing bass, flurries of flute, jazz drums and Tim Burton-style backing vocals, it's clear that something has changed since last we met them. A year in the making, Into The Murky Water is the sound of The Leisure Society gone widescreen.

The band's 2009 debut album, The Sleeper, came from a delicate place. Its lead track, Last Of The Melting Snow, was the product of a lonely New Year's Eve Nick spent at the point of post-breakup desperation. Into The Murky Water comes from a happier starting point, but looks back on the bad times too. ?There's a bit of nostalgia there, a thought that it wasn't so bad after all,? says Nick. ?Without all these crap things happening, without the years of crap jobs and playing in bands that never go anywhere, I wouldn't be where I am today.?

For songwriter Nick, the journey to this point has taken more than a decade. As a teenager in Burton-on-Trent, Staffordshire, a mutual friend introduced him to the film actor Paddy Considine. ?He was from the wrong side of the tracks really, hanging around with all the petty criminals,? remembers Nick. As the young guitarist's creativity rubbed off on Paddy, Paddy's wild side rubbed off on Nick. He soon found himself bunking off from sixth form to jam with Considine and his art college friend, director Shane Meadows, and together they formed the indie band She Talks To Angels.

?If it hadn't been for Shane I probably never would have become a professional musician ? and I probably wouldn't have had ten years of misery,? laughs Nick. ?I was supposed to be going to university but Shane was an infectious personality and full of big ideas. I deferred for a year to be in the band, then another year, and then the band broke up. He wasn't popular with my mother.?

Following the split, Nick was scooped up by local indie hopes The Telescopes, who were signed to Creation Records. ?Our first gig was with Blur in Switzerland,? remembers Nick. ?It was the first time I'd ever flown. I was a bit overawed by the whole thing.?

But luck was not on Nick's side, and The Telescopes split having not recorded a note since his arrival. Nick retired into himself, taking manual jobs and working on music that wasn't necessarily intended for anyone to hear. Shane Meadows remained a supporter, hiring Nick to score 1999's A Room For Romeo Brass and 2004's Dead Man's Shoes, but Nick was losing his confidence. By the mid 2000s, he hadn't sung in front of anyone for years.

Everything changed with the arrival of fellow Burton-on-Trent exile Christian, the outgoing yin to Nick's shy, reserved yang. They first played together when Christian was still a teenager. ?I idolised Nick because he was always in the bands my bands were supporting,? says Christian. ?I was so nervous when we jammed I didn't impress him very much.? Unlike Nick, pianist Christian was keen to escape the Midlands town. ?Being a sort of fey, late developed poetic type in Burton-on-Trent, you got used to getting beaten up a few times,? he laughs.

Christian moved to London in 2004 with a development deal for his art-rock solo project, Christian Silva. Two years later, when Nick found himself at his lowest ebb following the gargantuan break-up that spawned Last Of The Melting Snow, Christian lured him down to London to join in, and even offered him a couch to sleep on. When his housemates' patience ran out, Nick moved into Christian's tiny bedroom. ?The only way to fill the awkward silence was for Nick to sing these beautiful songs he'd been writing,? says Christian. ?As soon as he started playing them, I felt like I'd found my calling. I felt like they needed to be heard.?

Finding likeminded souls in Brighton's Willkommen Collective, headed by Tom Cowan of Shoreline, they released The Sleeper on Willkommen Records, with limited expectations. ?Most of the songs are just really cathartic,? says Nick. ?I wrote them because I was thoroughly miserable and it was comforting to write them. I never believed in my wildest dreams that it would lead to where it has.? Christian was more confident. ?I knew there was an audience out there for us,? he says, ?which probably tells you all you need to know about our different personalities.?

The catalyst was the single, Last Of The Melting Snow, which was championed by Radcliffe and Maconie on Radio 2 and Elbow's Guy Garvey on 6Music. Within months of its release, Nick had been nominated for an Ivor Novello award, to rapturous media attention. ?TV crews came to film me at the carpet warehouse where I was working packing carpets,? says the singer. ?I suppose they wanted me to be the new Susan Boyle. It got really embarrassing after a while but my co-workers loved it, they were all standing in the background waving at the camera.?

Those days in the warehouse were a productive time for Nick, who would scribble down lyrics and ideas on scraps of paper as he went about his business. His leaving do was another bittersweet moment. ?A lot of people got made redundant at the same time, so it was odd to be leaving to go and live out my dream while others were losing their jobs,? says Nick. A song on the new album, I Shall Forever Remain An Amateur, is written about the experience. Nick's world was to keep changing as the snowball kept rolling.

The album, re-released on Full Time Hobby, became a slow-burn success story. Richard Thompson invited the band to play at his Meltdown Festival (?He gave us a weird, cosmic pep talk about the nature of relativity and our time on earth before we went on stage,? says Christian. ?We drifted on stage wondering whether we existed or not,?). There was another Ivor Novello nomination. They packed a tent at Glastonbury. Even Brian Eno declared himself a fan. ?We went to his Christmas party, which was quite an experience,? says Christian. ?As I watched my girlfriend doing the conga with Brian Eno, I thought, life's gone in a strange direction.?

By the time they came to record their second album, Nick and Christian were able to come out of the bedroom studio and record with members of the crack six-piece live band they'd assembled, fleshing out their sound to something fuller and richer. That's Bas Hankins (drums), Helen Whitaker (flute), Darren Bonehill (bass), Mike Sidell (violin), William Calderbank (Cello) and newcomer Amy May on Viola ? now more a part of The Leisure Society than ever before.

The ?Murky Water sessions began in earnest in May 2010 at a mock Tudor mansion in Kent, where the rhythm parts were thrashed over the course of five days with just the neighbourhood bats for company. ?We wanted to do a bit of a Led Zep, set all our kit up there and wig out,? says Christian. ?It was quite nice to rock out in a country space, because the silence is quite noisy.?

After two weeks going wild in the country, they spent the rest of the year working at Trinity Music College and Nick's apartment in Greenwich, crafting an album that's got a surprise around every corner. ?We've agonised over every squeak, every noise, to a point of lunacy,? says Christian.

The strange, new world Nick and Christian find themselves in is reflected by the album's title, which came to Nick while reading Albert Camus's The Fall. ?I always felt Nick was watching from the sidelines in some way,? says Christian. ?On this album, he's immersed himself in all the things he was looking at. It's more colourful and vibrant, and it's full of happiness and terror. He was the guy poised to dive on the cover of The Sleeper. Now he's heading into the murky water.?

The Fine Art Of Hanging On

Alone Aboard The Ark

Into The Murky Water