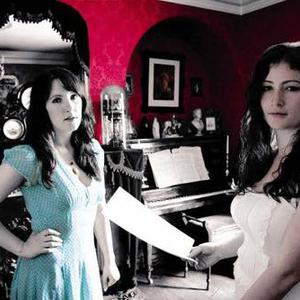 The Unthanks were formerly known as Rachel Unthank & The Winterset. The name changed with the lineup, in the summer of 2009. The first album to be released under the new name was "Here's The Tender Coming". The band released their 2nd album, "Last", in March 2011. Known for their timeless, unsentimental and quietly subversive tales of loss, fear, booze, brawls, abuse and sorrow, siblings Rachel and Becky Unthank are honest, young storytellers outside of time, forging links between folk worlds old, new and other.

Known for their timeless, unsentimental and quietly subversive tales of loss, fear, booze, brawls, abuse and sorrow, siblings Rachel and Becky Unthank are honest, young storytellers outside of time, forging links between folk worlds old, new and other. It's hard to imagine a British folk band with fans like Radiohead, Portishead, Robert Wyatt, Ben Folds, Elvis Costello, Rosanne Cash, Ewan McGregor and Nick Hornby, but The Unthanks occupy a unique place in music. Influenced as much by the minimalist eccentricity of Steve Reich, Antony & The Johnsons, Robert Wyatt and Miles Davis, as they are by their Geordie native North East England, back home The Unthanks have established themselves as the most innovative and critically acclaimed folk band in modern history.

Using a kaleidoscope of unlikely instruments, their unique approach to storytelling straddles the complex relationship between modernism and learning from the past. Staunch traditionalism and sonic adventure ought to be polar opposites, yet they are easy bedfellows in the gentle hands of The Unthanks; the British counterpart to the leftfield folk leanings of Sufjan Stevens, Bonnie Prince Billy and Tom Waits.

The Unthanks don't sound like any of these acts but belong to a growing number of artists definable only by their restless, peerless eccentricity. Formerly known as Rachel Unthank & The Winterset, their second album The Bairns (2007) was nominated for the Mercury Music Prize and appeared in The Best Albums of the Decade in both Uncut and The Guardian. Here's The Tender Coming (2009) was both BBC and Mojo Magazine Folk Album of the Year and featured in almost every UK music mag and broadsheet Albums of the Year poll.'

In 2012 The Unthanks were working on a combined album and live project with the Brighouse & Rastrick brass band (another north-east English musical outfit at the head of their somewhat different field!).

Sorrows Away - Ltd A5 Book Edition

Diversions Vol. 4 - The Songs And Poems Of Molly Drake - Extras

Diversions, Vol. 4: The Songs and Poems of Molly Drake

Diversions Vol. 3 - Songs From The Shipyards

Diversions Vol. 1: The Songs Of Robert Wyatt And Antony & The Johnsons