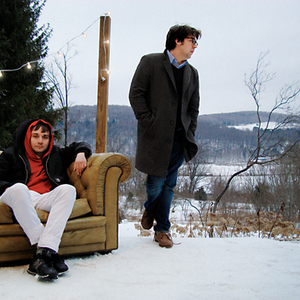 Department of Eagles began in 2001, when Daniel Rossen and Fred Nicolaus were randomly assigned to live together by New York University. During their academically lax spring semester, they made an "album" of beat-type songs best described as "What DJ Shadow's retarded little brother would sound like." Nevertheless, a small record company in California heard the CDR and wanted to release a couple of 7" singles.

Around that time, a friend's father, Jeff Saltzman, invited the group to record in his new studio. Fred and Dan used the opportunity to record the bulk of their debut album, which featured a blend of the beat-type stuff and more straightforward songwriting. It was released in 2003 and did fine, selling a modest number of copies and garnering some decent press.

In 2004, the group graduated from college and moved into an apartment in Brooklyn with an aggressive, hirsute landlord named Baki. Shortly thereafter, Daniel joined the group Grizzly Bear and began playing guitar and singing with them (he went on to write a goodly portion of their sophomore album, Yellow House). Fred tried to escape his boring magazine job by going on tour opening up for the band Subtle, but the tour was cancelled when Subtle's bus crashed, tragically injuring keyboardist Dax Pierson. DOE was on something of a hiatus. Then in 2005, a British label re-released their debut album in Europe under a different title, and the group began working on new material. This time around, the music featured little-to-no electronic embellishments and was inspired by Randy Newman, Van Dyke Parks, Paul Williams, and Paul McCartney. On October 7, 2008 they released their follow-up, In Ear Park, on 4AD.

The Whitey On The Moon UK LP