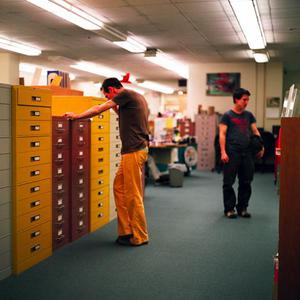 The story of The Books began in 2000, when Nick Zammuto and Paul de Jong met through a friend in New York City. Sharing similar interests but different backgrounds in acoustic music and found sound, Zammuto and de Jong took their sonic experiments to the studio. Eventually, with some urging by Tom Steinle of Tomlab Records, they created what would become their debut record, 'Thought for Food', in 2002.

Within a year, the Books relocated to Hot Springs, NC, and recorded and released 'The Lemon of Pink'. With a lot of favorable word of mouth and critical buzz from the first two records, the Books relocated again in winter of 2004 and recorded in an old Victorian home in North Adams, MA. With the release of 'Lost and Safe' in April of 2005, the Books prepared to tour with their unique blend of samples and acoustic music. All three Books albums were released on Tomlab Records.

One of the most unique aspects of the band is the video compositions which play during their live performances. The videos sync with the music and provide visuals to coincide with the many found-sounds the band employs. According to the band, much of the video is pulled from home movies and ephemeral films bought from thrift stores. On their new track entitled 'A Cold Freezin' Night', the many audio samples were pulled from Talkboy tapes also acquired from thrift stores.

Recently, The Books announced the addition of a third member of the band, who plays violin, guitar, and electronics. In August 2010, their newest album entitled 'The Way Out' was released on Temporary Residence.

In early 2012, Nick Zammuto announced the end of the duo and the beginning of his solo project Zammuto.

For more information, music, etc. on The Books go to:
http://www.myspace.com/thebooksmusicpage

Music For A French Elevator and Other Oddities (Remastered 2011) CD5

The Lemon Of Pink