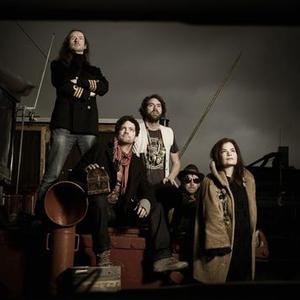 Tunng are an experimental folk band which formed in 2003 in London, England. They are often associated with folktronica due to the electronic influences evident in some of their work. The band consists of Mike Lindsay (vocals, guitar), Becky Jacobs (vocals, percussion, synths), Ashley Bates (banjo, guitar), Phil Winter (electronics, sampling, keyboards), Martin Smith (percussion, keyboards/piano) and Simon Glenister (drums). Co-founder Sam Genders (vocals, guitar) left the band before the release of "...And Then We Saw Land" in 2010.

Tunng started when Sam Genders met Mike Lindsay in the latter's studio in a Soho basement below a clothes shop. Genders was a singer/songwriter, and Lindsay had a studio, making electronica and making a living through producing advert music. They both found that Lindsay's distinctive way with twinkling sounds and tight production enhanced the folky songs they were both writing to no end, and a signature sound developed.

Tunng's first album 'Mother's Daughter And Other Songs' was released by Static Caravan in 2005. But since Genders made at first the choice not to play live, Lindsay found Becky Jacobs and Ashley Bates help with live shows. Over time Phil Winter and Martin Smith became part of the band and have all contributed more to recordings: first on 'Comments Of The Inner Chorus' (2006), but far more so on 'Good Arrows' (2007).

The latest album '...And Then We Saw Land' (2010) has been the most successful to date and was recorded in the semi-legendary Play Industries Studio, Shoreditch, with access to its vast collection of vintage synthesizers helping develop a more delicate and inter-woven production style. Simon Glenister added live drums to the gigs from 2009 for a heavier sound , a long way from the seated studio project tunng once was.

"...often beloved for its bucolic oddness and modernist gleam, Tunng's polyphonic future folk blossoms with enchanting melodies, simmering grooves, and found sound that has propelled the band into a paradise of exceeded expectations" (Absolute Punk).

Mike Lindsay will release an album in 2012 with the project White Mountain Cheek on kimi records in Iceland and Full Time Hobby in the UK. Guest stars on the record will be Sin Fang, Mugison, Mr. Silla and the Kafibarrinn choir. A tour through Iceland and the UK is planned as well.

Songs You Make At Night

Comments Of The Inner Chorus

This Is...Tunng: Mother's Daughter And Other Songs