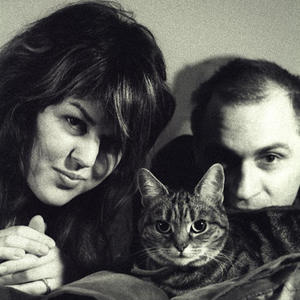 Psapp (pronounced sap) is an experimental electronica band from the United Kingdom. The band, a duo consisting of members Carim Clasmann and Galia Durant, are sometimes credited with inventing a musical style known as toytronica. Galia Durant's story began in a household running amok with records, art and books. Galia's mum collected protest songs while her dad is a professorial art historian with an encyclopaedic knowledge of Indian classical music.

Galia Durant's story began in a household running amok with records, art and books. Galia's mum collected protest songs while her dad is a professorial art historian with an encyclopaedic knowledge of Indian classical music. Galia ?loved it all,? finding no real distinction between Woody Guthrie peacenik anthems, sarangi etudes and her elder brother's acid jazz albums. After struggling to learn violin and piano (she preferred her 1988 vintage Casio SK-8 sampling keyboard, which the band still use), at 8, Galia graduated from a more-ideas-than-action ?band', ?GO?, formed with her brother.

Carim Clasmann's musical youth was spent in German recording studios learning the alchemical business of faders, compressors and microphones. A self-professed failure at the school recorder and a frustrated guitarist, he dabbled in music-making while cutting demos for other people. Quickly rising through the Cologne studio ranks, Carim learned his chops recording bands like Einst&uuml;rzende Neubauten and Die Toten Hosen and even worked at Can's famous Inner Space studio, always dallying with music of his own on the side. He moved to London at the close of the ?90s, working and then taking up residence at the King's Cross studio/house he and Psapp currently call home.

Carim met Galia through mutual, musically-inclined friends who would often gather at the studio. For a year or so the duo experimented, united by an eclectic taste for Tom Waits, The Cure, Erik Satie, Duke Ellington and ?anything that's silly and uses stupid noises.? Their own ?silly noises' married to Galia's sultry vocals and perspicacious lyrics produced recordings of shimmering originality and nascent charm - an opinion shared by the handful of labels to which Psapp, as they'd by now christened themselves, sent demos toward the end of 2002. A litany of recordings duly followed. Early 2003's debut EP for Melodic called, instructively, Do Something Wrong was followed by a single, "Difficult Key", the following Autumn. After seeing a live show by Morr Music electronicists Isan and befriending the band's Robin Saville, Psapp's next recordings would appear on Saville's own Arable imprint, with Winter ?04's Buttons and War EP attracting rave notices.

Around this time several Psapp tracks found their way to US music consultants who were universally wowed by the band's evocative charms. The duo's music seemed to chime with the TV zeitgeist and their music started to seep into primetime dramas (not to mention a very high profile Volkswagen advert), culminating in the track Cosy In The Rocket being chosen as the theme music to hit ABC medical drama Grey's Anatomy, which premiered in March 2005. At a stroke, burgeoning inquisitiveness about Psapp turned into an eager US fanbase. Meanwhile, in King's Cross, dust wasn't being allowed to settle. A Japanese EP, Northdown appeared in March 2004, swiftly followed by a vinyl-only 4-track nugget, Rear moth for the discreet Wiaiwya imprint ? some tracks from which would appear on the band's debut album for Arable (also licensed to Leaf for the US and Canada, Third Ear in Japan and Gronland for much of Europe). Released in February 2005, Tiger, My Friend consolidated the burgeoning interest in all things Psapp. MOJO magazine's four star review ? ?Arresting, childlike pop confections? effortlessly carved pop sophistication?? was typically hyperbolic. With Psapp duly rising, the major labels soon came a-courting but by autumn 2005 Psapp had spurned their fevered advances, preferring to ink a deal with Domino.

Toward the close of '05 Psapp embarked on their first live ventures. Translating their records' layered complexity to the stage was never going to be easy, but with the multi-instrumental Galia and Carim joined by Gwen Cheeseman (violin, floatation toys), Eshan Khadaroo (drums, lumps of wood), and Jim Whelan (bass, keyboards, ashtrays etc), (joined in 2008 by Matt Jones (keyboardist, Ultrasound, Minuteman)), Psapp took to the road around the UK and Europe, eventually honing an exhilarating, ?in the flesh' version of their incomparable recorded sound. Initial touring forays successfully completed, Psapp set about buffing their second album to lustrous perfection, pausing only to head down to the Dorchester Hotel to pick up the BMI Award for 2005's Best TV Theme Tune for ?Cosy In The Rocket'.

Psapp are known for their humour on stage, throwing cats (hand-made by the band) into the audience and their highly eclectic music videos.

What Makes Us Glow

The Only Thing I Ever Wanted

Do Something Wrong (EP)