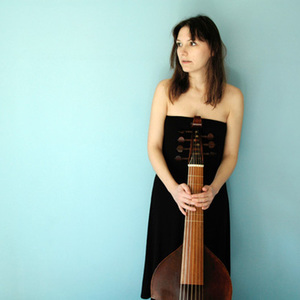 C&eacute;cile Schott was born in France and began making music under the name Colleen in 2001, after a friend gave her a CD-R with the ACID Pro music production software contained within. Samples were a common part of her early work and in summer 2003 the debut album Everyone Alive Wants Answers was released. It was notable for its heavy use of looped samples, which were taken from records in her collection and heavily modified.

The album was critically well-received and drew enough attention to warrant touring. During live shows, Schott would replicate the sounds from the album using acoustic instruments played through pedals as she thought the idea of using a laptop live was uninspiring.

This approach using live physical instruments led to the 2005 follow-up, The Golden Morning Breaks. This album was something of a departure from the sampled setting of her debut and consisted almost entirely of natural, non-synthetic sounds, an approach Schott has stated in interviews that she prefers. On January 25, 2006 she released her contribution to the Staalplaat label's series of live performances, called Mort Aux Vaches (meaning 'Death to Cows'). Each piece focuses on a different instrument: zither, ukulele, cello, melodica, etc.

Colleen Et Les Boites A Musique hit the shops on October 2nd 2006, and is comprised of 14 short pieces created using only music boxes, originally commissioned by France Culture's Atelier De Cr?ation Radiophonique. In May 2007 dancer and choreographer Perrine Valli performed S?rie, a production with an original score composed by Schott - her first foray into dance.

Les ondes silencieuses ('The Still Waters'), Colleen's third full-length album, was released on May 21, 2007. A slight evolution in sound was again heard on the album, as Schott adopted a more free-form approach in place of the use of loops that were so apparent in much of her prior output.

There was also a Colleen is a Dutch singer/songwriter who released an album titled Chameleon in 2001 under the name Colleen.
http://www.colleen.nl

The Tunnel and the Clearing

A Flame My Love, A Frequency

The Weighing Of The Heart