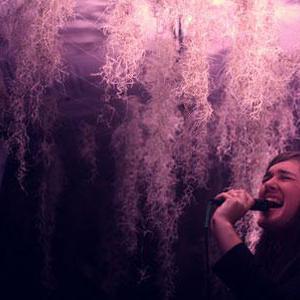 Louisiana-bred, Brooklyn-based recording artist Julianna Barwick crafts ethereal, largely wordless soundscapes, all of which are built around multiple loops and layers of her angelic voice. Barwick, who credits a rural, church choir upbringing for her unique sound, begins most tracks with a single phrase or refrain, then uses a loop station and the occasional piano or percussive instrument to build the song into a swirling mass of lush, ambient folk.

She released her first two collections of songs, the full-length Sanguine and the EP Florine, in 2009 and 2010, respectively, before issuing her Asthmatic Kitty debut, Magic Place, in 2011.

Lacking definable lyrics, Julianna's songs create their own themes sonically and leave nameless emotional impressions. Julianna's talents as a vocalist push most of the musical strength in the album, her choice of melodic vocal overdubs with vocal percussion is fascinating and dizzying. Some sounds become as indecipherable as the human voice. Comparable to Bj?rk's Medulla approach to end instrumentation, most of the tracks are all vocal based. Julianna's all vocal album has less of a political method behind it as does Bj?rk's Medulla; it's based more on her natural approach to songwriting: spontaneously improving and recording immediately. Many of the songs were written on the fly.

Healing Is A Miracle