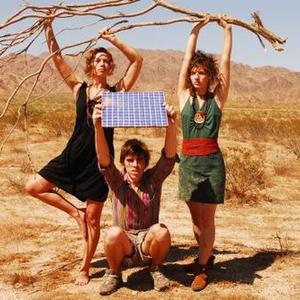 Spawned from the vernal heat of the Florida swamps amidst swirling patterns of pine orchards and pre-Columbian artifacts, Prince Rama was whispered into the ears of Taraka Larson, Nimai Larson, and Michael Collins in the summer of 2007 by the clanging of prayer bells and goat-skin drums. They left the Hare Krishna farm where they were staying to go to art school and form a creative nucleus in Boston.

There, their engaging and often unpredictable ritualistic live shows attracted a rapid cult following, replete with collective chants, werewolf summonings, Sanskrit invocations, and the distribution of various handmade percussion to members of the audience.

In a short time, the trio was picked up by British-based label, Cosmos Recordings who released their first collection of lo-fi bedroom recordings as Threshold Dances and flew them out to the UK to tour and record the cinematically orchestrated Zetland. At this time, Taraka also began working for the controversial visionary artist Paul Laffoley and began composing Architecture of Utopia inspired by his paintings, an album that explores mapping utopic space via the mandalic architecture of the vinyl record. In spring 2009 the group departed from Boston and went on a series of extensive tours across the US and Europe, culminating in a tragic car robbery in which all their equipment got stolen. Thanks to an overwhelming outpouring from friends, family, and fans, the group was catapulted to rebuild and reinvent themselves from the ground up to make a unique new sound surcharged with a renewed sense of awe, gratitude, and urgency. The trio moved to Brooklyn, and with their new instruments wrote and recorded Shadow Temple, produced with the help of Dave (Avey Tare) and Josh (Deakin) of Animal Collective for release on Paw Tracks in August 2010.