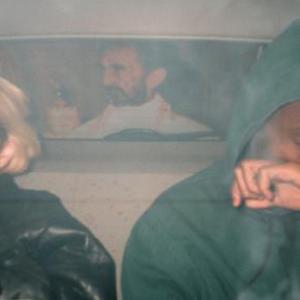 Hype Williams, comprised of Dean Blunt and Inga Copeland, is named after the film maker responsible for Belly. Starring rappers Nas and DMX, it was a hyper-stylised, Nihilist mess and this London duo borrow its finer traits, its strut and loathing. From beneath a medicated haze they lace twanging Americana with seams of swaggering dread. They are Bobby Peru made music. The band's sound consists of very lo-fi, homegrown recordings incorporating hip-hop and '80s references?and the persona going along the band is equally as bricolaged as the tracks.

The band's sound consists of very lo-fi, homegrown recordings incorporating hip-hop and '80s references?and the persona going along the band is equally as bricolaged as the tracks. Onstage, online, and on film, the band likes to maintain an aura of cut-and-paste mystery: they perform wearing elaborate DIY masks on stage (often made out of aluminium foil) and are practically impossible to catch for an interview. When you do corner them with questions, they respond something totally (or rather, seemingly) unrelated.

This is hardly a surprising choice for Frieze?both members have fine arts degrees and theoretical backgrounds and have been involved in curation, writing, photography, arts. This isn't their first dabble in the art world either: this summer, the pair took over Hackney-based art space, SPACE, for a two-day residency and debauchery. As Inga Copeland put it in a recent interview, "Our connection to visual arts is less about us and more to do with a missing link between art and music. We're artists primarily, and music is the medium we're involved in at the moment due to the tools that are easily available," adding that "to cut a long story short, art is art, it's all under the same umbrella."

Their mixtapes are available here and here.

Do Roids And Kill E'rything (EP)

Find Out What Happens When People Stop Being Polite, And Start Gettin' Reel