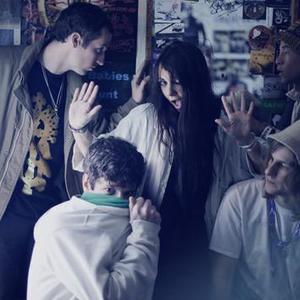 Gang Gang Dance is a music group based in New York City, signed to the the 4AD record label. Members were previously seen in Washington DC's The Cranium, NYC's Angel Blood, Actress, and Ssab Songs (with Harmony Korine). The group has become well known within the New York experimental/art scene for its distinctive sound that draws equally from African rhythms, Middle eastern dance music, industrial, noise, grime and other genres.

While Gang Gang Dance is generally associated with fellow space cases (Animal Collective, Black Dice), their sound is wholly unique. While their earlier sound was much more chaotic and sprawling, the latest material is a combination of skewed pop music with the unpredictability of experimental/noise performances. The eerie female vocals are reminiscent at times of an airy Kate Bush, trapped in a deep well with no one to sing to. The band belts out Arabian synth lines mixed with delayed out shimmer guitar, over dark poly-rhythms. Their beat heavy weird tribal-noise appeals to fans of all flavors of marginal and/or left centered pop music. And yes, you can dance to it.

Revival Of The Shittest