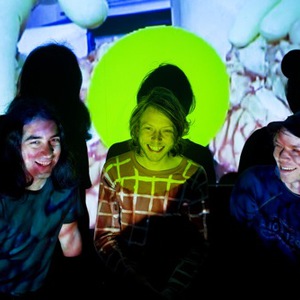 Black Dice are an experimental group based in Brooklyn. They formed in Providence, Rhode Island, United States in 1997, comprising members Bjorn Copeland (guitar), Hisham Bharoocha (drums) (following a short drumming stint by Lightning Bolt's Brian Chippendale), Sebastian Blanck (bass) and Eric Copeland (vocals). After the band relocated to new york City, Sebastian Blanck left and was replaced by Aaron Warren. Hisham Bharoocha had previously sung for Lightning Bolt and is currently working on other projects, but he left the band too and is now working as a solo musician Soft Circle.

Black Dice have considerably changed their sound since their inception, moving from a noisy, thrashy style to their current, trippy, more electronic music. They Released 'Broken Ear Record' on James Murphy (Of LCD Soundsystem) and Tim Goldsmith's dfa label. In May 2007 they released a 12" on Paw Tracks and they have released 'Load Blown' in October 2007 on the same label.