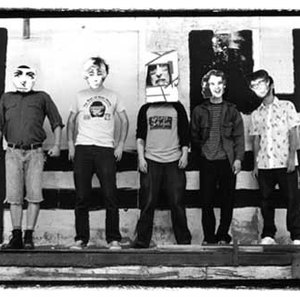 Fly Pan Am, or Le Fly Pan Am, is a Canadian experimental rock band formed in Montreal in 1996. They released their albums through the Montreal-based Constellation Records, producing and collaborating on works with the likes of Godspeed You! Black Emperor and Shalabi Effect. The band was formed in 1996 by guitarists Jonathan Parant and Roger Tellier-Craig, drummer Felix Morel, and bassist Jean-Sebastian Truchy. Eric Gingras would later on join the band in 2002, contributing guitar and percussion.

The band was formed in 1996 by guitarists Jonathan Parant and Roger Tellier-Craig, drummer Felix Morel, and bassist Jean-Sebastian Truchy. Eric Gingras would later on join the band in 2002, contributing guitar and percussion.

They shared personnel with Godspeed You! Black Emperor until guitarist Roger Tellier-Craig left Godspeed You! Black Emperor in 2003 to concentrate full time on Fly Pan Am. In 2005, Roger Tellier-Craig and Eric Gingras began the french psychedelic kraut-pop outfit known as Pas Chic Chic along with other members of Montreal's illustrious music scene.

The band is noticeably influenced by the French Canadian culture of Quebec, as well as the burgeoning avant-garde musical scene in Montreal. French is the predominant language used in producing albums and writing lyrics, with English peppered throughout. The track titles on past records, as stated by Roger Tellier-Craig, were written in a way to interpret the song, which Tellier-Craig concedes was "lost on most listeners" due to the French used. Unorthodox electronic sounds, occasionally provided by Alexandre St-Onge, intersect the music and often serve to confuse the listener.

The group often records their albums at the Hotel2Tango, a recording studio owned by Efrim Menuck and Thierry Amar of Godspeed You! Black Emperor fame, as well as Howard Bilerman. As a result of these ties, members of other Montreal-based bands sometimes participate as guest musicians or aid the recording process.

An announcement from the band in 2006 spoke of their indefinite hiatus and Jonathan Parant's part in Feu Th&eacute;r&egrave;se. Felix currently drums for the psychedelic sludge band panopticon eyelids and for les enfants sauvages. No other information about the other band members' current musical endeavors has been provided.