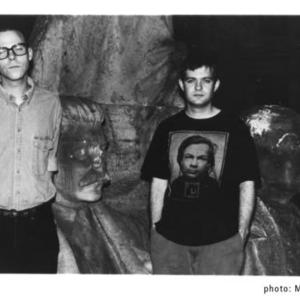 Gastr del Sol is an oft-cited stalwart of the post-rock movement of the 1990s. Based in Chicago, Gastr del Sol explored idiosyncratic sonic textures, veering from avant-garde punk to atonal songcraft to Musique concr?te to composition for small orchestra. The group began as the brain-child of David Grubbs, an alumnus of the Louisville, KY punk rock scene that produced Squirrel Bait and Slint, the former of which he was a member.

The group began as the brain-child of David Grubbs, an alumnus of the Louisville, KY punk rock scene that produced Squirrel Bait and Slint, the former of which he was a member. (Grubbs has been often mistaken as a member of Slint, and while he had many formal connections with the group, he was never an official member) A few years after Grubbs's arrival in Chicago, his esoteric punk group Bastro metamorphosed into Gastr del Sol.

With the release of 1993's The Serpentine Similar, Grubbs and his former Bastro colleagues Bundy K. Brown (bass) and John McEntire (drums) traded the more traditional arrangements of punk rock for a literate, meandering yet often poignant approach. The slippery tones of Brown's bass provided a counterpoint to Grubbs's clean electric guitar and naked piano. The appearance of drums was rare but satisfying.

In the following year, the guitarist, composer and all-around production guru Jim O'Rourke entered the fray and Brown (who at the time was busy enough with his other projects, including?with McEntire?the seminal post-rock act Tortoise) left the band. With O'Rourke's arrival, Gastr del Sol became a more or less equal collaboration between he and Grubbs. Although it is difficult spot precisely who did what, it appears that lyrics were Grubbs's domain and production and tape manipulation were O'Rourke's, with both of these able musicians handling instrumental duties as desired, with the occasional appearance of McEntire on drums and other musicians on an auxiliary basis.

The bulk of this line-up's catalogue was released by Chicago's Drag City Records, beginning with 1994's stark, acoustic guitar-based Crookt, Crackt, Or Fly. The centerpiece of this album is the sprawling "Work From Smoke," which fuses Grubbs's and O'Rourke's penchant for atonal guitar interplay with eerie bass clarinet and Grubbs's increasingly weird lyrics (sample: "Smoky tones pump canine bellows / Canine bellows bisect the pup"). Also of note is Gastr del Sol's nod to the punk rock past of its members, Is That a Rifle When It Rains?.

Crookt, Crackt, or Fly was quickly followed by a pair of releases in 1995. The Mirror Repair EP is as angular and surprising as Crookt, Crackt, or Fly, but with a broader instrumental palette. Its centerpiece, Eight Corners, is a sonic delight of bizarre electronic noises popping in and out in unpredictable ways over a backdrop of pristine piano. The Harp Factory on Lake Street, which was released on the experimental Table of the Elements label and is now out of print, is even more gorgeous, if not immediately accessible. It is essentially a piece for chamber orchestra, with the sparse appearance of Grubbs's voice and piano.

1996's Upgrade & Afterlife is a rich listening experience, with several of Gastr's standard quiet, angular songs bookended by a would-be O'Rourke film score, Our Exquisite Replica Of 'Eternity', and an extended interpretation of the John Fahey piece "Dry Bones in the Valley." Of the songs, track artist=gastr del sol]Rebecca Sylvester[/track] is especially noteworthy in that its pretty yet mysterious coda section hints at the chamber pop to come with their final release.

With the release of Camoufleur in 1998, Gastr del Sol finally veered into the realm of conventional melodicism. This rich album is surely the entry-point for the uninitiated. In its accessible chord patterns, sweet melodies and flugelhorn- and string-heavy arrangements, it resembles some of the solo releases (like Eureka and Halfway To A Threeway) that O'Rourke would go on to record. However, it is infused throughout with Grubbs's absurdist musings. Especially poignant is Blues Subtitled No Sense of Wonder, which, upon repeated listenings, manages to fuse the melancholy of Tom Waits with the sweetness of Pet Sounds-era Beach Boys.

With Jim O'Rourke's technically flawless acoustic guitar work in the final track "Bauchredner," however, it is clear that the halves of Gastr del Sol just had too much talent between them to go on as a group. O'Rourke, who had released dozens of experimental albums previous and concurrent to Gastr del Sol, went on to release a number of excellent and generally accessible albums, beginning with 1997's Bad Timing. Grubbs's foray into solodom began with 1996's Banana Cabbage, Potato Lettuce, and Onion Orange