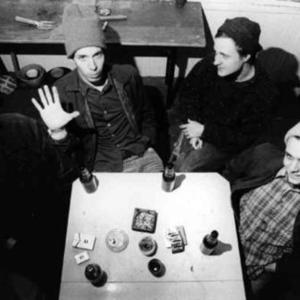 June of 44 was an American rock band which was formed in 1994 from ex-members of Rodan, Lungfish, Codeine and Hoover (Sean Meadows had yet to participate in the Lungfish music band by 1994; his first album with them was actually in 1996). Clearly influenced by Slint, the band's music is often described as post-rock. June of 44 released their work on Quarter Stick with the exception of Fish 6. June of 44 split up in 2000. Members: Fred Erskine Sean Meadows Jeff Mueller

The Anatomy Of Sharks (EP)

Engine Takes To The Water