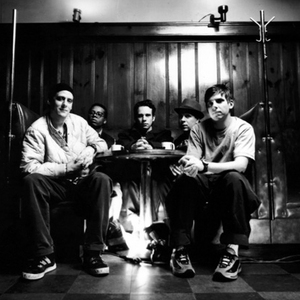 Tortoise's almost entirely instrumental music defies easy categorization. The group gained significant attention from their early career. The members have roots in Chicago's fertile music scene, playing in various indie rock and punk groups. Tortoise was among the first American indie rock bands to incorporate styles closer to krautrock, dub, minimalism, electronica and various jazz styles, rather than the standard rock and roll and punk that had dominated indie rock for years.

The group's origins lie in the late 1980's pairing of McCombs and Herndon, who imagined themselves as a freelance rhythm section (like reggae legends Sly And Robbie). That idea never saw fruition but in the summer of 2007 they formed the group Bumps and released a record with the same name on indie hip-hop label Stones Throw records, their interest in grooving rhythms and recording studio trickery led to McEntire and Brown (both formerly of Bastro) joining, followed by Bitney. Though songs are credited to all the musicans, McEntire quickly became, if not the acknowledged leader, then the group's guiding force, at least via media perception. In reality his extra contributions mainly took the form of being the recording engineer and mixer.

Their first single was issued in 1993, and their self-titled debut album followed a year later. Instrumental and mostly mid-tempo, Tortoise slowly garnered praise and attention, due in part to the unusual instrumentation (two bass guitars, three percussionists switching between drums, vibraphones and marimbas). A remix album followed, Rhythms, Resolutions and Clusters.

Brown left and was replaced by Pajo (formerly of Slint, who plays mostly bass, but offers Tortoise's first recorded guitar, as well) for 1996's Millions Now Living Will Never Die, a breakthrough, both in quality and attention. The album blended many genres, yet never seems like a pastiche. Millions showed up on many year-end best of lists, and the 20 minute Djed was described by critic John Bush as proof that "Tortoise made experimental rock do double duty as evocative, beautiful music."

In 1998, Tortoise released TNT, arguably their most jazz-inflected album. Pajo had been replaced by Parker, who has a strong jazz background. 2001 led to Standards, where Tortoise incorporated more electronic sounds and post-production into its music than in previous works. 2004 saw the release of It's All Around You, and in 2006 they collaborated with Bonnie 'Prince' Billy on an album of covers titled The Brave and the Bold.

Some have cited Tortoise as being one of the prime forces behind the development and popularity of the so-called "post-rock" movement. Others, however, have criticized Tortoise's music as being derivative of progressive rock and argue that Tortoise have been subject to much undeserved hype for such a relatively new ensemble.

Other groups related to Tortoise include The Sea and Cake, Brokeback, Shrimp Boat, Isotope 217 and the Chicago Underground Duo. Tortoise records on the Thrill Jockey label.

It's All Around You