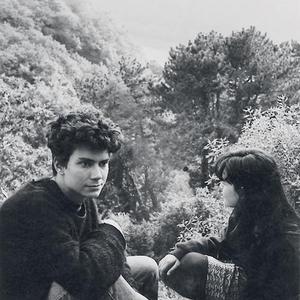 Flying Saucer Attack were formed in Bristol, England in 1992. David Pearce was the core member of the group, and Rachel Brook (of Movietone, another Bristol band) was a member for most of the band's lifetime. The band were marked by quiet vocals and sheets of feedback with similarities to many of the so called "shoegaze" bands that pre-dated them such as Ride, My Bloody Valentine or the indie noise-pop group The Jesus and Mary Chain.

The band were marked by quiet vocals and sheets of feedback with similarities to many of the so called "shoegaze" bands that pre-dated them such as Ride, My Bloody Valentine or the indie noise-pop group The Jesus and Mary Chain. FSA were able to create a small but enthusiastic fanbase as one of the more remarkable experimental rock bands of the day. The band was notable for its lo-fi approach to production, recording most of its output at home via a normal home stereo system and eschewing the traditional studio environment. This gave the music a DIY feel and allowed the band freedom to experiment as it wanted.

Other allied bands, often sharing musicians, were Crescent, Matt Elliott (a.k.a The Third Eye Foundation), Light and Amp. Many of the principal musicians involved, including Pearce, attended Farnham Art College in the late 1980s. Pearce collaborated in a variety of bands with Matt Elliott, Richard Walker (Amp) and Rachel Brook and Kate Wright (future partners in Movietone), before forming FSA with Brook (his girlfriend at the time) in 1992. Brook continued to play with Movietone throughout the history of Flying Saucer Attack, and is still a member of that group.

Early releases were limited edition vinyl 7" singles, often in handmade packaging. The first album (self-titled, but sometimes called Rural Psychedelia as those words appear on the cover) included a noisy cover of Suede's contemporary single "The Drowners", which provoked press interest in the record. The Third Eye Foundation (Matt Elliott) programmed beats, played bongos, drums, clarinet, & guitar on some tracks. Like the early singles, the album was released on FSA's own Heartbeat label, and was deliberately only made available on vinyl. Also like the singles it sold out very quickly despite minimal publicity, due to the band's cult reputation.

The album was released in the USA by VHF Records in early 1994, on CD and vinyl. The CD bore the phrase "Compact discs are a major cause of the breakdown of society" and other releases would carry messages such as "Keep vinyl alive", "Home taping is reinventing music" and "Less is more".

By 1994, the band had signed to Domino Records (which became home to many of the bands from Bristol's experimental music scene), and although records continued to be released on vinyl, CDs usually accompanied Pearce's preferred format. The first release for the new label was Distance, which collected the early singles and some unreleased material. Over the next three years the band released two albums and further singles including a cover of Wire's "Outdoor Miner", and a version of the folk song "Sally Free and Easy" which was initially only released on CD - the sleevenote explained that the pressing plant had been unable to cut it to vinyl (a US plant later achieved the feat by using a monaural master and it was issued on 12" by Drag City).

Another singles compilation followed alongside an album consisting of live tracks (mainly unstructured noise, released by Bruce Russell's Corpus Hermeticum imprint) and an LP with two long tracks constructed by fellow Domino act Tele:funken from samples of the band. In 1995 Brook left the band to concentrate on Movietone. Chorus had a sleeve note "This album marks the end of FSA phase one", but subsequent releases (New Lands was described as "phase two") did not depart from the usual mixture of aggressive feedback and noise, and gentle folk-influenced melody.

After New Lands and a final vinyl-only 7" single, Pearce left Domino Records - one further album was released in 2000 on Pearce's own Heartbeat records, and this effectively marked the end of the group. Pearce subsequently collaborated with Jessica Bailiff under the name Clear Horizon, a self-titled album being released on Kranky Records in 2003.

In Search Of Spaces