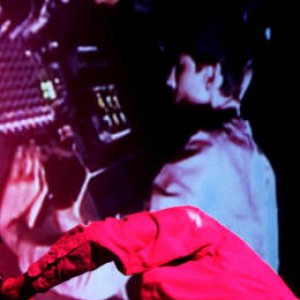 EXPERIMENTAL AUDIO RESEARCH is a psychedelic / drone project formed in 1990 by Sonic Boom (Peter Kember) as a solo and collaborative ensemble in order to pursue the more experimental work he had contributed to Spacemen 3 since the 1980s. The project revolves around two separate yet overlapping areas - studio recording and live performance, both environments being treated as complementary but different sides of the same coin.

The project revolves around two separate yet overlapping areas - studio recording and live performance, both environments being treated as complementary but different sides of the same coin.

EAR's main ethos, embodied in their acronymous name, is one of necessary experimentation. They create a space where any sound or texture, technique or emotion is treated as a possible contribution to the piece(s) in hand. The same applies to the interaction of the performers improvisation and integration are left open, until what feels like the right moment, all the while keeping an eye on the whole, and avoiding a forum where concept overtakes content.

EAR's members and musical philosophies run the gamut from purely Electronically generated sounds -produced instantaneously- to beautifully crafted, acoustic techniques - the product of a lifetime's experience. This is a rare terrain where individual extremes merge in the collective sound - each member exploring the possibilities of the integration of opposites. By definition each of the group's performances are quite different -to replicate performances is of no interest. Surprise and variety are far more important - yet all within and around their intended framework and disciplines. In this way the group creates a special kind of sound-scape and mood space aiming forwards whilst heeding yesterdays experiments and advances. To ignore the work of Cage, Varese, Stockhausen or Cardew would be foolhardy. To dismiss the expeirments of LaBradford, Joe Meek, Eno or Kraftwerk would equally be a mistake. EAR exists in the furrow between the low brow and the high brow, between traditional and contemporary, independent of categorisations, where AMM can meet Spacemen 3, where classical music can meet My Bloody Valentine. Where Preconceptions and prejudice can be left outside and sounds can exist for their intrinsic values. Where sounds can show their true selves.

To assume that this approach must lack discipline is a common mistake. The discipline is mirrored by the freedom given the performers, keeping its aims pure and free from excess, aiming to be progressive, but not just for progressiveness' sake.

The Instruments used in their recordings and performances do not revolve around the chromatic scale, and no amount of divisions per octave is defined before hand - indeed many of the instruments from the Theremin and Modular synthesisers to the Insect and Human voice generators "lack" any fretted or keyed sequential controllers to even suggest a particular mode or scale. In this way, the most stimulating range of sounds is come by, because it is the most stimulating and not for any predetermined reasons. Likewise, the sounds selected come from various random or heuristic programming functions and improvisational playing techniques rather than from a preset bank of sounds - none of these instruments have a 'memory' or "preset" facility -giving unique sounds every time the instrument is used. In this way the performer becomes the selector from the near infinite possible range of textures.