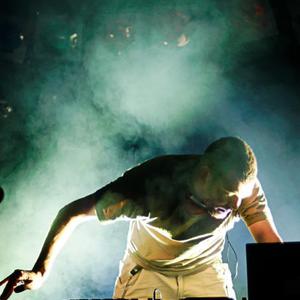 Third Eye Foundation is the project of Matt Elliott, a protagonist of the Bristol scene, first active with Flying Saucer Attack and then with Amp, but stylistically affiliated to the jungle scene. His approach to dance music harks back to 1970s industrial music, in particular to Throbbing Gristle's cacophony, and therefore resulted in sonic puzzles of difficult appeal. On the debut album Semtex (Linda's Strange Vacation, 1995), and on the collection of collaborations In Version (Linda's Strange Vacation, 1996), Elliott was helped out only by Debbie Parsons.

Semtex (Linda's Strange Vacation, 1995) is all about lo-fi production, atmospheric guitar textures (Seefeel-grade guitar-based ambient music) and jungle breakbeats. Sleep is the best amalgam of shoegazing and jungle. When the beat chills down, 3EF drifts in Orb-grade trance (Dreams On His Fingers, the 12-minute Once When I Was An Indian). Among attempts to build a classical music out of dance music, 3EF's non-dancefloor drum'n'bass ranks as one of the boldest ideas.

A stronger dub vibration permeates the collaborations on In Version (Linda's Strange Vacation, 1996). Short Wave Dub (with Amp), Superconstellation (with Crescent), Eyes (with Hood), the 17-minute Way Out (with Flying Saucer Attack) tend to be spacier and trancier. Each episode is stretched to the limit and ultimately annoys. This version of 3EF resembles Bill Laswell's omnivorous and interminable dub jams.

Ghost (Domino, 1997) replaced guitars with samples, and generally increased the disorienting puzzle of sounds. The seven lengthy tracks are avantgarde experiments, like the tribal musique concrete of I've Seen The Light And It's Dark, or psychedelic vignettes bordering on ambient/cosmic music, like The Out Sound From Way Out, overflowing with dreamy drones and unfriendly noises and harsh beats, or the closing Donald Crowhurst, a minimalistic sequencing of drones. What To Do But Cry represents the wilder side of the project, with its sudden bursts of "raga-fied" guitar within cyclic maelstroms of noise.
The magniloquent, horror visions of Corpses As Bedmates (the guitars literally screaming, the drums pounding frantically) and Ghosts (evoking robotic dinosaurs in alien jungles) better express Elliot's metaphysics (often derailed by a sense of fear). The Star's Gone Out is a soundtrack for the creaking clockwork of the universe: one can hear the giant mechanism rotating and the metallic clangor of galaxies rolling along their orbits

1998 released "you Guys Kill Me" on Domino/Merge

What Is It With You

You Guys Kill Me