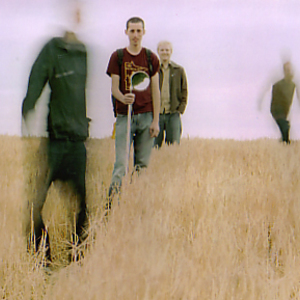 Hood are an experimental band from Leeds, UK formed in December 1990. The core of the band features brothers Richard and Chris Adams, joined by various different friends over the years. With influences from New Zealand's Flying Nun label and Aphex Twin, and stylistic similarities to The Cure, Mogwai, My Bloody Valentine, Pavement and Boards of Canada, their style of music often changes from ambient rock, to glitch to shoegaze.

Their first releases were very limited vinyl singles on various different small, indie, and some now defunct, record labels, although 555 records who released '(The) Weight' in 1998 is still alive.

In 1994, record labels Fluff and Slumberland released Hood's first full length album, entitled 'Cabled Linear Traction'. It was a landmark for the band, some still say it's their best album. It had similarities to bands like The Cure, Sonic Youth and Pavement.

The album was issued on CD in 1999 by Slumberland, who also released 1996's 'Silent 88' album. The latter was similar sounding to 'CLT', but with much more experimentation going on and far more use of electronics.

A collection of limited and rare singles was put together by Happy Go Lucky records in 1997 and released on CD and vinyl, the vinyl version coming with a free 7" record.

In 1997, Domino Record Co snapped up Hood and released the single 'Useless'. A lo-fi indie electronica affair, not too dissimilar to the aforementioned '(The) Weight' released the next year.

After another handful of singles and eps for Domino, they released the album 'Rustic Houses, Forlorn Valleys' in 1998. A dense, dark and tension building album, sounding somewhere in between Labradford, Mogwai and Massive Attack and produced by the band and Matt Elliott from Third Eye Foundation.

A year later came 'The Cycle of Days and Seasons', once again produced by Matt Elliott. With an ever changing line up still revolving around the two brothers, the sound of the band changed yet again, moving further into indie electronics.

Colaborating with friends Doseone and Why? from the Anticon collective came Hoods 5th studio album 'Cold House' in 2001, their most well known and collectively appreciated ablum. It contained elements of post rock, idm, indie as well as Doseone and Why?'s voice and lyric talents. Features the single 'You Show No Emotion at All'. Released on Domino.

In early 2005, Hood released 'Outside Closer', an emotional journey through ambience and hip hop beats. More line up changes occured, meaning this album was yet again different to the previous. Taking influence from The Remote Viewer, Prefuse 73 and Empress (the singer of which appears on the album). The tracks 'The Lost You' and 'The Negatives' were released as singles, featuring b-sides and videos for the tracks.

Since the release of 'Outside Closer' Hood have toured with Why? promoting his new album 'Elephant Eyelash' and released various remixes.

During 2006, Gareth S Brown, who played in the aforementioned tour, has been working on a solo album, due for release in November on Richard's girlfriend's label Misplaced Pets.

Currently due for release on record label anticon, is a solo album from Hood lead singer Chris Adams under the name of Bracken. The lead single from the album, titled 'Heathens', is due out in November, the album, titled 'We Know About the Need' follows in January.

In 2007 Richard Adams formed a side project The Declining Winter which has spawned a 7" The Future Sound of Hip Hop parts 1 and 2 and an album Goodbye Minnesota.

There are no plans for any further Hood releases.

Home Is Where It Hurts (EP)

The Cycle Of Days And Seasons